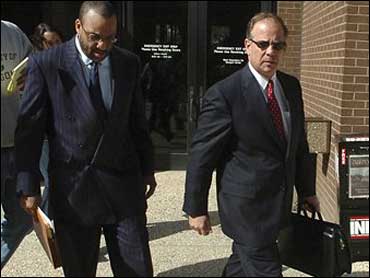 Time-stamped photographs will show an exotic dancer was already injured and "very impaired" when she arrived at a party where she claims she was raped by members of Duke University's men's lacrosse team, an attorney for one of the players said Sunday.

Durham attorney Bill Thomas said some of the photographs, taken when she arrived at the house, indicate the woman was injured before getting to the party March 13. They show extensive bruises and scrapes on her legs, especially around the knees, he said. And Kerry Sutton, an attorney representing the lacrosse team's co-captain suggests it's possible the alleged victim is making the story up, CBS News correspondent Trish Regan reports.

"This young lady was substantially impaired. She had fallen several times during the course of the evening," Thomas said.

He declined to identify the player he represents and said he would not release the photos, taken by at least two cameras, until pending DNA tests are completed.

He also wouldn't say whether the photos were taken by a lacrosse team member or someone else; court documents have indicated that only team members were present at the party.

No one has been charged in the case, but the allegations that members of the nearly all-white team raped the woman, a black student at a nearby university, have rocked both Duke and Durham.

The allegations have led to the resignation of coach Mike Pressler, the cancellation of the lacrosse season and the suspension of one player from school.

Several dozen people gathered Sunday outside the house where the party took place, and pledged to return each Sunday until the case is resolved.

District Attorney Mike Nifong, who was expected to return this week from an out-of-town conference and has not commented on the case in the past several days, has said previously he is confident a rape occurred. Court documents said a medical exam of the alleged victim found injuries consistent with sexual assault.

The victim has not returned repeated messages seeking comment, but her father said Sunday she hasn't changed her story.

"I expect them to say that," he said of the lawyers' contentions his daughter is lying.

Woody Van, who represented the alleged victim four years ago when she was accused of stealing a taxi and trying to run over a police office, says he "believes her to be a credible person."

"I would like to believe her story," Van says. "This is such a horrific event. … To try to make up something like that is just hard for me to imagine."

Thomas said the photos contradict the alleged victim's assertion she was scared, as they show her standing at the door of the off-campus house with "a major grin on her face" as she tried to get back inside.

"People inside the house have stated she was banging on the door, attempting to regain entry," Thomas said.

The woman told police she was pulled into a bathroom and assaulted after coming back into the house. But Thomas said the woman locked herself in the bathroom, where police later found her purse, cell phone, and several artificial fingernails she claimed to have lost during a struggle with her attackers.

Durham attorney Bob Eckstrand, who represents 33 of the players, told the Charlotte Observer that a few photos taken minutes before one of the dancers made a 911 call to police shows the accuser fumbling through her purse. Her negligee is "not disheveled or unbuttoned and not torn -- not even close," Ekstrand said. Another photo shows one of the lacrosse team captains helping the dancer into the other dancer's car, Ekstrand told the newspaper.

Thomas said one of the attorneys representing team members had interviewed the other dancer extensively, and she said the alleged victim never told her about a rape.

"All of these statements you've heard ... about this brutal assault, rape, kidnapping and robbery which occurred, I believe that the public will soon be able to learn the truth, and that these allegations are totally false and without merit," Thomas said.

Both the team's captains and attorneys for team members have said the DNA tests, which may be completed this week, will prove the allegations are false, Regan reports. The players' attorneys also have raised other questions about the allegations, saying e-mails written in the hours after the alleged attack will help prove the players' claims that nothing happened that night.

Attorneys also have raised suspicions about a 911 call, made shortly after the alleged attack would have occurred, from a black woman who claimed someone at the party shouted racial slurs at her and a friend. The caller alternatively told police the pair were driving and walking past the house. Thomas said Sunday he and other attorneys believe the second dancer at the party made the call.

"These young men have been absolutely vilified in the press," Thomas said. "I think this week we will go a long ways toward clearing these young men's names. I can assure you that this has been a nightmare for each and every one of them."

Nifong has said he could file charges as soon as this week, if charges are filed at all, Regan reports.