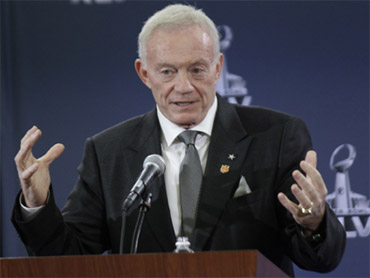 DALLAS - Ticket-holding football fans who ended up with no seats or what they considered bad views of the Super Bowl have filed a class-action lawsuit against the NFL, the Dallas Cowboys and team owner Jerry Jones.

The federal lawsuit filed Tuesday in Dallas — just two days after the big game — alleges breach of contract, fraud and deceptive sales practices on behalf of people who ended up watching the game on TV at Cowboys Stadium in Arlington, or had seats the lawsuit labeled "illegitimate."

The NFL had announced just hours before the Green Bay Packers played the Pittsburgh Steelers on Sunday that about 1,250 temporary seats were deemed unsafe, and the league scrambled to find new seats for about 850 people. The remaining 400 were forced to watch from standing-room locations around the stadium.

One plaintiff is a Steelers fan from Pennsylvania who was among the 400 with a ticket but no seat. The other is a Cowboys season ticket holder who claims many of Jones' biggest-spending fans were stuck in metal folding chairs without a view of the stadium's giant video board.

Spokesmen for the Cowboys and the NFL had no comment Wednesday.

"No one is attempting to get rich from this," he said. "People are merely interested in being compensated for what happened (at the stadium) and the cost that goes with that."

Avenatti said he's a Cowboys season ticket holder who attended Sunday's game. He said he wasn't one of the fans affected by the seating issues but heard plenty of complaints.

"People at the game were disgusted, but it doesn't take long to be disgusted with a situation like this," he said.

Avenatti said Steve Simms, the Steelers fan named in the lawsuit, was so put off by trying to watch the game from standing-room areas that he left at halftime.

Mike Dolabi, the Cowboys season ticket holder in the lawsuit, is among a group called "Founders" who paid $100,000 per seat just for the right to buy tickets. Those so-called personal seat licenses resulted in more than $100 million in revenue for Jones, according to the lawsuit, which seeks $5 million in damages.

Some of those fans were in temporary seats under overhangs and couldn't see the giant video board above the field, "which defendant Jones and the Cowboys routinely claim is one of the most unique and best features of Cowboys Stadium," the lawsuit said. They could see the field, and extra TVs were installed in those areas.

"You were effectively in a bat cave," Avenatti said. "You don't take your 400 best customers and treat them like that."

The lawsuit alleges the Cowboys have offered no compensation to their ticket holders for "their obstructed and illegitimate seats."

The NFL has said the roughly 400 fans without seats have two options. The first is a ticket to next year's Super Bowl and a cash payment of $2,400, three times the face value of the ticket. The second is a ticket to any future Super Bowl, along with round-trip airfare and hotel accommodations.

The Packers beat the Steelers 31-25 in the Super Bowl.

On Sunday, a letter was circulated to people at Cowboys Stadium explaining the situation, which CBS station KDKA in Pittsburgh posted online.