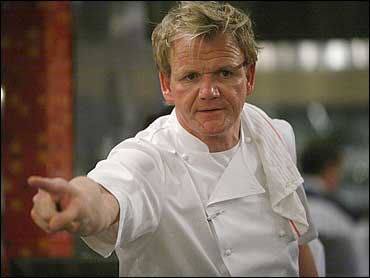 Celebrity chef Gordon Ramsay is accused of faking scenes for a new reality television show in which he was supposed to "makeover" failing restaurants in a week's time as his confrontations with staff were recorded, according to a lawsuit on Tuesday.

A former general manager at Dillons in Manhattan, Martin R. Hyde, said Ramsay featured the Indian-American restaurant as part of a new series entitled "Ramsay's Kitchen Nightmares," to be distributed this fall by the Fox Broadcasting Co.

Hyde's lawsuit said Ramsay falsely claimed meat was spoiled, used a defective chair to imply that Dillons' furniture was shoddy and even hired actors to pose as customers to make the restaurant look busy at the end of the week.

Hyde also claimed Ramsay, known for foul-mouthed outbursts and star of Fox's reality competition "Hell's Kitchen," humiliated him and forced him to quit his job to avoid further abuse.

He asked for millions of dollars in damages and a court order to stop the show from airing.

Ramsay spokesman, James Curich, said he could not comment on the lawsuit because he had not yet seen it. As for allegations about fabrications, Curich said: "It is a reality show and as far as I know it's not something they do."

Jennifer Sprague, a Fox Broadcasting spokeswoman in Los Angeles, said she could not comment.

Andrew Blackmore, a manager at Dillons, said he had signed a release stating that he could not talk about the show to the media.

A year ago, Ramsay won a libel action in London against a newspaper that accused him of faking scenes on his "Kitchen Nightmares" reality show when he worked to turn around a struggling bistro in northern England.

Associated Newspapers Ltd., publisher of the Evening Standard, agreed to print an apology and pay $138,000 in damages to Ramsay and the makers of his program.

"I won't let people write anything they want to about me," Ramsay said at the time.