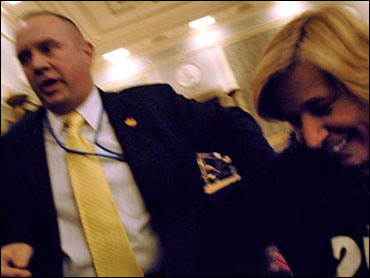 Anti-war activist Cindy Sheehan, mother of a fallen soldier in Iraq, wasn't the only one ejected from the House gallery during the State of the Union address for wearing a T-shirt with a war-related slogan. The wife of a powerful Republican congressman was also asked to leave.

Beverly Young, wife of Rep. C.W. Bill Young of Florida — chairman of the House Defense Appropriations subcommittee — was removed from the gallery because she was wearing a T-shirt that read, "Support the Troops — Defending Our Freedom."

When Young was told she was considered a protester, she called the police officer an idiot, but unlike Sheehan, was not arrested, reports CBS News correspondent Bob Fuss.

"Because she had on a shirt that someone didn't like that said support our troops, she was kicked out of this gallery," Bill Young said on the House floor Wednesday morning, holding up the gray shirt.

Mrs. Young was sitting about six rows from first lady Laura Bush and asked to leave. She argued with police in the hallway outside the House chamber.

"They said I was protesting," she told the St. Petersburg Times. "I said, "Read my shirt, it is not a protest.' They said, 'We consider that a protest.' I said, 'Then you are an idiot."'

They told her she was being treated the same as Sheehan, a protester ejected before the speech Tuesday night for wearing a T-shirt with an antiwar slogan. Sheehan wrote in her blog Wednesday that she intends to file a First Amendment lawsuit.

"I don't want to live in a country that prohibits any person, whether he/she has paid the ultimate price for that country, from wearing, saying, writing, or telephoning any negative statements about the government," Sheehan wrote.

Capitol Police took Sheehan, invited as a guest of Rep. Lynn Woolsey, D-Calif., away in handcuffs and charged her with unlawful conduct, a misdemeanor. She later was released on her own recognizance.

Capitol Police Sgt. Kimberly Schneider said police warned her that such displays were not allowed in the House chamber, but Sheehan did not respond.

Woolsey gave Sheehan her only ticket earlier in the day — Gallery 5, seat 7, row A — while Sheehan was attending an "alternative state of the union" news conference by CODEPINK, a group pushing for an end to the Iraq war.

In her blog, Sheehan wrote that her T-shirt said, "2245 Dead. How many more?" — a reference to the number of soldiers killed in Iraq.

She said she felt uncomfortable about attending the speech.

"I knew George Bush would say things that would hurt me and anger me and I knew that I couldn't disrupt the address because Lynn had given me the ticket," Sheehan wrote. "I didn't want to be disruptive out of respect for her."

She said she had one arm out of her coat when an officer yelled, "Protestor."

"He then ran over to me, hauled me out of my seat and roughly (with my hands behind my back) shoved me up the stairs," she wrote. She was then cuffed and driven to police headquarters a few blocks away.

"I was never told that I couldn't wear that shirt into the Congress," Sheehan wrote. "I was never asked to take it off or zip my jacket back up. If I had been asked to do any of those things...I would have, and written about the suppression of my freedom of speech later."

Sheehan was arrested in September with about 300 other anti-war activists in front of the White House after a weekend of protests against the war in Iraq. In August, she spent 26 days camped near Mr. Bush's ranch in Crawford, Texas, where he was spending a working vacation.