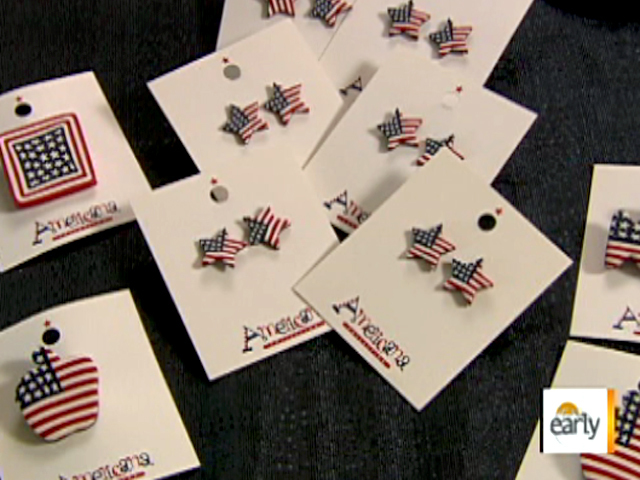 The latest jobs report from the Labor Department has produced a feeling of frustration among the 14 million Americans looking for work. One factor contributing to the discouraging news is the declining number of manufacturing jobs, many of which have gone overseas.

On "The Early Show," CBS News Correspondent Michelle Miller shared the story of one small business owner who saw a sharp decline in profits when one very well-known American tourist spot turned to overseas manufacturers to stock its store shelves.

Miller noted tourists come from all over the world to visit U.S. museums, national parks and zoos. But finding an American-made souvenir to take home with them is proving to be a difficult task. Lawmakers are now fighting to get more American-made products back in souvenir shops, and for small business owners and manufacturers alike, that's very welcome news.

For nearly a decade, Merrie Buchsbaum sold her handcrafted wares made in her Connecticut home to one of the most iconic institutions in America.

Buchsbaum said twice a month she was shipping to the gift shop at the Smithsonian's American History Museum. Her Americana Collection she says was among the museum's bestsellers.

Buchsbaum said, "One day the buyer came in with her spreadsheet with all the numbers and she said, 'Do you realize you sell more work as a single artist than any other artist at the Smithsonian?'"

But despite brisk sales, the relationship came to an abrupt end.

Buchsbaum said, "Management changed and a new buyer came in."

Sales at her company Merrily Made dropped 20 percent, forcing Buchsbaum to eventually lay-off her three employees. Now she works all alone.

Miller asked, "You think it was a lower price point that drove them?"

Buchsbaum responded, "I know they sell lower price point items today, but I'm a handmade item made in America."

What's sold to an estimated four million visitors who flock to the American History Museum each year, items with the inscription "Made in China."

West Virginia democrat Rep. Nick Rahal is out to change that. Working with his fellow lawmakers, he crafted legislation - tying the sale of American-made souvenirs to future federal funding. Seventy percent of the museum's budget comes from the federal government.

Rahall said, "I think it's quite un-American. ... I think Americans would pay a dollar or two more...to have their lapel American flag pin, say 'Made in the U.S.A.'"

The last 30 years have proven otherwise. According to U.S. Department of Labor statistics, more than eight million Americans lost their manufacturing jobs as factories moved overseas. Small businesses like Buchsbaum's put out of business as stores increasingly ditched American-made in lieu of a cheaper products.

Rahall said, "It is important that we send a message that we help boost the morale of American workers by showing them that we care to keep their jobs here and we care to have our products made in America."

Bowing to pressure, the Smithsonian has agreed to sell only American-made merchandise at the American History's Price of Freedom gift shop by early July.

Buchsbaum says she would like to be first in line.

When asked if she hopes to be back in the Smithsonian, Buchsbaum said, "You bet. I better be back."

But many say the problem extends far beyond the Smithsonian to all national institutions, such as landmarks and parks. Rahall says everywhere that he and his fellow congressmen can, they'll be looking into it.

The Smithsonian is not saying much about Rahall's proposed bill, Miller said, but added what they are saying is "'Look, we can provide some American-made products for some of our museums. We have a history museum; we have other museums that cater to other types of motifs.' They're looking for the right price point. Some of the items aren't necessarily made in America that they're looking for. It's a catch-22."