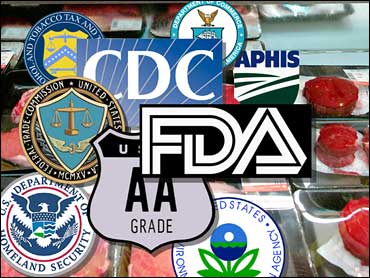 The Food and Drug Administration bears the brunt of food safety oversight, a mission called into question in the wake of a massive recall of peanut products. But at least 15 government agencies have a hand in making sure food is safe under at least 30 different laws, some of which date back to the early 1900s.

"There is no one person, no individual today who is responsible for food safety," said Rep. Rosa DeLauro, D-Conn. "We have an immediate crisis which requires a real restructuring."

DeLauro and Sen. Dick Durbin, D-Ill., have been proposing an overhaul of the nation's food safety structure for more than a decade. There might now be the political will to do something following the outbreak of salmonella traced to peanuts blamed for sickening 600 people and killing at least nine others.

A bill sponsored by DeLauro would divide the FDA into two, separating the agency's drug oversight from its food safety duties.

"We have a crisis at the moment. Let's try to address that," DeLauro said.

Agriculture Secretary Tom Vilsack has gone even further, suggesting that all the government agencies responsible for food safety (including those that are part of the Agriculture Department) should be combined into one. It's a major break from his predecessors.

"You can't have two systems and be able to reassure people you've got the job covered," Vilsack said.

Such a radical overhaul would be difficult. Many in the food industry have long opposed any changes, fearing increased oversight could cut into their profits. Their allies in Congress have resisted new laws.

But resistance appears to be softening, the result of high-profile outbreaks of food-borne illnesses from domestic and foreign food sources.

Industry is open to change, said Scott Faber, a top lobbyist for the Grocery Manufacturers Association, which represents large food and beverage companies.

"The food industry recognizes that we need to give FDA new powers and new resources to address new challenges," Faber said.

Businesses are concerned about reorganizing the entire system. The priority should be strengthening the current agencies before rearranging them, he said.

The old system is an overlapping patchwork of inspections. Both the Agriculture Department and the FDA inspect shipments of imported food at 18 U.S. ports of entry. Sometimes, the FDA stores products at Agriculture Department warehouses, where they wait to be inspected by the FDA because agriculture employees aren't allowed to inspect them.

The two agencies also differ on how frequently they inspect businesses. Meat inspectors visit processing facilities daily in most cases, while FDA inspects much less frequently.

Most manufacturers of prepackaged, open-faced meat sandwiches, for example, are inspected daily by the Agriculture Department. But add a second piece of bread to make it a traditional sandwich and the FDA takes over. That means inspections probably happen once every five years, according to a study by the Government Accountability Office.

The GAO, the investigative arm of Congress, recommended two years ago that Congress re-examine the system. It said 76 million people are sickened by food-borne illness each year, and 5,000 die.

But few changes have been made. And despite the salmonella outbreak, even the lawmakers urging changes say a streamlined new agency is unlikely any time soon.

A flurry of food safety bills have been introduced in Congress. Many would strengthen FDA's oversight rather than creating a single lead agency.

The departments/agencies responsible for food safety:

Alcohol and Tobacco Tax and Trade Bureau - Enforces laws covering the production, use and distribution of alcoholic beverages.

Environmental Protection Agency (EPA) - Regulates the use of pesticides and maximum allowable residue levels in food commodities and animal feed.