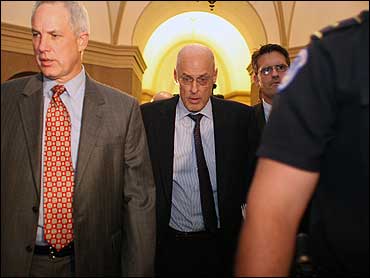 Nervously eyeing the markets' next trading session, key lawmakers in both parties and Treasury Secretary Henry Paulson worked late into the night Saturday trying to close an agreement on a multibillion-dollar government bailout of distressed financial companies.

House Speaker Nancy Pelosi, D-Calif., told reporters "quite a bit" of progress was being made on a deal that Congress could send to President Bush as early as Monday after votes in both houses.

A key sticking point was how to include a new government-sponsored program demanded by House Republicans as an alternative to devoting the entire $700 billion proposed by Bush on buying up devalued mortgage-backed securities and other toxic debt from banks and investors.

The House was scheduled to convene at 1 p.m. EDT Sunday and members there were hoping they could vote on it by that evening and go home to campaign for re-election. The Senate isn't scheduled to go back into session until Monday morning.

Presidential politics again played a role in the bargaining. Republican John McCain and Democrat Barack Obama called key negotiators and portrayed themselves as helping without getting directly involved in the talks.

Bush expressed confidence earlier Saturday that lawmakers soon would approve a rescue plan while acknowledging that many Americans are frustrated and angry at the amount of money taxpayers are being asked to put up for covering Wall Street firms' mistakes.

The president spoke with Paulson, McCain and other Republican lawmakers during the day, said White House spokesman Tony Fratto.

Under the plan being considered, the Treasury Department would buy deeply distressed mortgage-backed securities. The money should help troubled lenders make new loans. The government would later try to sell the discounted loan packages at the best possible price.

House Republicans were insisting that some of the money be available to insure, rather than buy, distressed mortgage-backed securities. Banks and investment firms holding such packages would pay the government for insurance against losses if the mortgages default.

Proponents say their idea would require less taxpayer spending. But the Treasury Department has said it would not pump enough money into the financial sector to make credit sufficiently available.

Another proposal would have the government receive stock warrants in return for the bailout relief, ensuring that proceeds from eventual sales of the discounted packages would return to the Treasury.

Negotiators were trying to settle on a means of limiting severance packages for executives of companies that benefit from the rescue plan.

They also discussed phasing in the program's costs. For example, after the first $350 billion or so is made available, Congress could try to block later amounts if it believed the program was not working. The president presumably could veto such a move, however, requiring extra large margins in the House and Senate to override.

"We should not be bailing out Wall Street on the backs of American taxpayers," House Minority Leader John Boehner, R-Ohio, told reporters at midafternoon, when Paulson and key House and Senate members took over the negotiations from their aides.

Senate Majority leader Harry Reid, D-Nev., said earlier that the goal was to come up with a final agreement before the Asian markets open Sunday night. "Everybody is waiting for this thing to tip a little bit too far," he said, so "we may not have another day."

The bailout is intended to rescue bankers from bad loans that threaten to derail the economy and plunge the country into a long depression. Some lawmakers likened the situation to a major car wreck that has backed up traffic - credit, in this case - for miles. The rescue is meant to remove the wreckage so credit can start moving to borrowers again, they said.

But there are at least a dozen sticking points, reports CBS News correspondent Thalia Assuras. Key among them figuring out who would pay premiums to cover future losses - the banks or the taxpayers - and whether future profits from the bailout would go into a housing trust fund.

And while Republicans have problems with the proposals pitched by the White House and Senate leaders, Democrats say no package can move forward unless conservative Republicans provide substantial votes. Conservatives are pushing an alternative package of tax cuts and insurance that would not require taxpayers to foot the bill, reports CBS News correspondent Bob Orr.

Democrats and administration officials said they were willing to include House Republicans' idea of having the government insure distressed mortgage-backed securities - but only as an option, not a replacement for the broader idea of buying those toxic securities.

"There may be a way in which that could be accommodated as part of the toolbox" available to the Treasury Department, said Sen. John Thune, R-S.D. "As a practical matter, that can't be the engine that drives this bill," he said.

Negotiators also discussed phasing in the program's costs. For example, after the first $350 billion is made available, Congress could try to block later amounts, which could total an additional $350 billion, if it believed the program was not working. The president presumably could veto such a move, however, requiring extra large margins in the House and Senate to override.

The negotiations have agreed to limit compensation to executives of corporations that would be covered by the rescue plan but there was disagreement on how to do it and by how much.

Whatever emerges "is not the proposal that we got from Secretary Paulson," Reid said. But lawmakers said it would be much closer to Paulson's original plan than to the alternative offered by House Republicans several days ago.

McCain, who flew to Washington after Friday night's presidential debate in Mississippi, spent part of Saturday working the phones and "helping out as he can," aide Mark Salter said. But McCain did not enter the Capitol, where his colleagues were voting on a $634 billion spending bill that ended a ban on drilling off the Atlantic and Pacific coasts, and sent billions of dollars to the military.

McCain supports such measures. But the vote would have been difficult for him because the bill also included more than 2,000 pet spending projects worth more than $6 billion. That is the kind of pork-barrel spending that McCain has pledged to end.

Obama campaigned in North Carolina and Virginia. Aides said he placed calls to Paulson, Reid and a key House member to keep tabs on the finance negotiations.

Both presidential candidates are trying to position themselves to take at least partial credit if an accord is reached. Obama spokesman Tommy Vietor offered new details from Thursday's contentious White House meeting that underscored the divisions among lawmakers trying to reach an agreement.

He said Obama encouraged Paulson to work with House Republicans. Since then, Vietor said, Obama has urged negotiators to find a compromise with enough options so the treasury secretary has the flexibility "to act in an effective manner to stem this crisis."

The Bailout On The Campaign Trail

In an Associated Press-Knowledge Networks poll, only 30 percent of Americans surveyed expressed support for Bush's package. Forty-five percent were opposed, with 25 percent undecided. The survey was conducted Thursday and had a margin of error or plus or minus 3.8 percentage points.

With the backroom negotiations moving ahead on an unpopular bill for a hard-to-define financial crisis, the bailout package is becoming a political football for those running for office (or trying to keep theirs).

National political watchers say depending on how Congress acts and how the economic crisis unfolds, the outcome could spell trouble for Republicans and incumbents Nov. 4.

"My sense is that the intensified focus on the economy will work to the advantage of all Democratic candidates, even if Congress acts soon on a bailout package with broad bipartisan support," Thomas E. Mann, senior fellow at the Brookings Institution in Washington, wrote in an e-mail. "By a decisive margin, the public trusts the Democrats to deal with serious economic problems more than the Republicans."

In New Mexico, Reps. Steve Pearce (R) and Tom Udall (D), who are running for the Senate seat being vacated by the retiring Pete Domenici, disagree on what the federal government's role should be in the current crisis, but both said they want more time to deliberate on the issues.

Udall said pressure from the Bush administration to complete the economic bailout this week has him "very worried."

"I'm going to insist that we are careful and take the time to deliberate on this," he said.

But, Candice Nelson, chairwoman of the Government Department at American University in Washington, says incumbents should not deliberate too long if they want to get re-elected, because voters want to see Congress act to resolve the nation's economic woes.

"There will be a lot of angry folks if we don't have a deal by the end of the weekend," she said Friday. "The longer this drags out, the worse this is going to be, both for the country and the Congress."

Staffers in both congressional offices say they have been swarmed with hundreds of phone calls and e-mails this week from concerned constituents.

Pearce said he has spoken with House leaders about allowing small investors to buy shares, spending $1,000 or even as little as $100, in troubled mortgage company stock to raise capital.

"I think we would solve the problem with private capital almost immediately," Pearce said. "I'm very hesitant to turn this over to government solutions."

"I would like to see ownership so that when we see a comeback, these taxpayers get their money back," Udall said. "The intent is not to own the companies forever, it's an attempt to stabilize the economy to get the taxpayers protected."

Smith said late Friday that Merkley tells a "lie" about Smith's record in a new TV ad on the crisis. The ad accuses Smith of supporting a "trillion-dollar blank check for Wall Street."

Smith called that a low blow that shows Merkley is unfit to serve in the Senate.

By running the ad - and attacking Smith on the campaign trail - Merkley "is putting his personal and partisan interest above that of scores of thousands of Oregonians" and other Americans, Smith said last night.

Merkley's spokesman, Matt Canter, said Smith's anger "should be directed at himself for voting with George Bush to end accountability on Wall Street."

Meanwhile, new details emerged of a remarkably tumultuous White House meeting on Thursday. With the session breaking up in disarray, according to two participants, President George W. Bush issued an appeal, saying, "Can't we just all go out and say things are OK?"

The group around the table, congressional leaders as well as McCain and Obama, spurned the presidential request for a publicly united front.

Earlier in the White House meeting, Democrats peppered House Republican leader John Boehner with questions about the details of an alternative he was backing. "I don't know what the hell they are," Bush said at one point," recalled one person who was in the room. All the participants spoke on condition of anonymity, saying the meeting was private.

The legislation the White House is promoting would allow the government to buy bad mortgages and other sour assets held by investors, most of them financial companies. That should make those companies more inclined to lend and lift a major weight off the already sputtering U.S. economy.

But a significant number of lawmakers, including many House conservatives, say they're against such heavy federal intervention. Under the Republican plan, the government would insure the distressed securities rather than buy them. Tax breaks would provide additional incentives to invest.