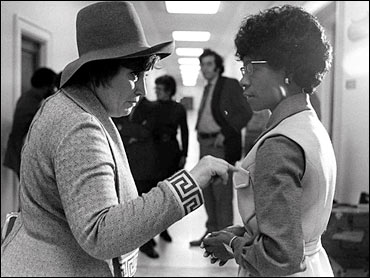 Shirley Chisholm, the first black woman elected to the U.S. Congress and an outspoken advocate for women and minorities during seven terms in the House of Representatives, died near Daytona Beach, friends said. She was 80.

The Rev. Jesse Jackson called Chisholm, who ran for president in 1972, a "woman of great courage."

"She was an activist and she never stopped fighting," Jackson said from Ohio, where he is set to lead a rally on Monday in Columbus. "She refused to accept the ordinary, and she had high expectations for herself and all people around her."

"She was our Moses that opened the Red Sea for us," Robert E. Williams, president of the NAACP in Flagler County, told The Associated Press late Sunday.

Chisholm, who was raised in a predominantly black New York City neighborhood and was elected to the U.S. House in 1968, was a riveting speaker who often criticized Congress as being too clubby and unresponsive.

"My greatest political asset, which professional politicians fear, is my mouth, out of which come all kinds of things one shouldn't always discuss for reasons of political expediency," she told voters.

She went to Congress to represent New York the same year Richard Nixon was elected to the White House and served until two years into Ronald Reagan's tenure as president. She also was a founding member of the Congressional Black Caucus in 1969.

Newly elected, she was assigned to the House Agriculture Committee, which she felt was irrelevant to her urban constituency. In an unheard of move, she demanded reassignment and got switched to the Veterans Affairs Committee.

Not long afterward she voted for Hale Boggs, who was white, over John Conyers, who was black, for majority leader. Boggs rewarded her with a place on the prized Education and Labor Committee and she was its third ranking member when she left.

She ran for the Democratic nomination for the presidency in 1972. When rival candidate and ideological opposite George Wallace was shot, she visited him in the hospital - an act that appalled her followers.

"He said, 'What are your people going to say?' I said: 'I know what they're going to say. But I wouldn't want what happened to you to happen to anyone.' He cried and cried," she recalled.

And when she needed support to extend the minimum wage to domestic workers two years later, it was Wallace who got her the votes from Southern members of Congress.

Pragmatism and power were watchwords. "Women have learned to flex their political muscles. You got to flex that muscle to get what you want," she said during her presidential campaign.

In her book, "Unbought and Unbossed," she recounted the campaign that brought her to Congress and wrote of her concerns about that body:

"Our representative democracy is not working because the Congress that is supposed to represent the voters does not respond to their needs. I believe the chief reason for this is that it is ruled by a small group of old men."

Chisholm's leadership traits were recognized by her parents early on, she recalled. Born Shirley St. Hill in New York City on Nov. 30, 1924, she was the eldest of four daughters of a Guyanese father and a Barbadian mother.

Her father, an unskilled laborer in a burlap bag factory, and her mother, a domestic, scrimped to educate their children.

At age 3, Shirley was sent to live on her grandmother's farm in Barbados. She attended British grammar school and picked up the clipped Caribbean accent that marked her speech.

She started her career as director of a day care center, and later served as an educational consultant with the city's Bureau of Child Welfare. She became active in local Democratic politics and ran successfully for the state Assembly in 1964.

She was an Assemblywoman from 1964 to 1968 before besting James Farmer, the former national chairman of the Congress of Racial Equality, to gain the House seat.

"I am the people's politician," she said at the time. "If the day should ever come when the people can't save me, I'll know I'm finished."

When she left 14 years later, she complained that many of her constituents misunderstood her, that she was a "pragmatic politician" whose influence was waning in conservative times. And she said she wanted more time for her family life.

After leaving Congress, Chisholm was named to the Purington Chair at Mount Holyoke College in South Hadley, Massachusetts, where she taught for four years. In later years she was a sought-after speaker on the lecture circuit.

Chisholm was married twice. Her 1949 marriage to Conrad Chisholm ended in divorce in February, 1977. Later that year she married New York State Assemblyman Arthur Hardwick, Jr. She had no children. Hardwick died in 1986.

"She was a mouthpiece for the underdog, the poor, underprivileged people, the people who did not have much of a chance," Conrad Chisholm, 88, told the AP early Monday in a telephone interview from West Palm Beach.

Once discussing what her legacy might be, Chisholm commented, "I'd like them to say that Shirley Chisholm had guts. That's how I'd like to be remembered."