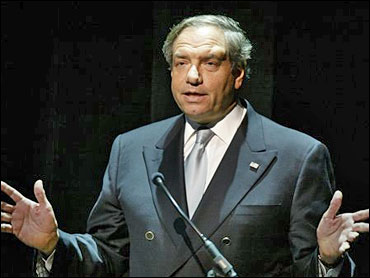 "Law & Order" creator Dick Wolf said he was jolted by NBC's cancellation of the fourth installment of his crime drama franchise, but is looking forward to producing yet another series for the network.

He's also eagerly anticipating a French version of "Law & Order: Criminal Intent" which, if successful, could trigger a wave of overseas adaptations of his series, Wolf said.

The series on broadcaster TF1 is likely to debut in 2006, trade paper Daily Variety reported Monday, noting that U.S. dramas have lagged behind sitcoms and reality shows in overseas adaptation.

"If it bears fruit in France, it's a pump-primer for the rest of the world," Wolf said.

"I was incredibly upset, disappointed, dismayed, any other adjectives that you could care to add," Wolf said.

But he and the network value the "Law & Order" brand as their "most important piece of business" and the centerpiece of a close business relationship, Wolf told the Television Critics Association on Monday.

The sets for "Trial by Jury" will remain standing for at least another year in New York, Wolf said, and he expects to be in production within that time on a drama about assistant district attorneys.

"It will have a different focus and be much more a character-driven show with closed-ended episodes," he said.

It also apparently will feature a young cast. Wolf noted the average age of prosecutors in the district attorney's office in the Manhattan borough of New York City is 28.

"Trial by Jury" lost star Jerry Orbach to cancer shortly after production started. NBC, which slipped in the ratings last season, risked alienating Wolf because it wanted to try some new ideas, executives have said.

The "Law & Order" franchise includes the original series as well as "Law & Order: Special Victims Unit" and "Criminal Intent." The brand will reach 600 combined episodes this fall, and Wolf said it exists alone in "long-term profitability."