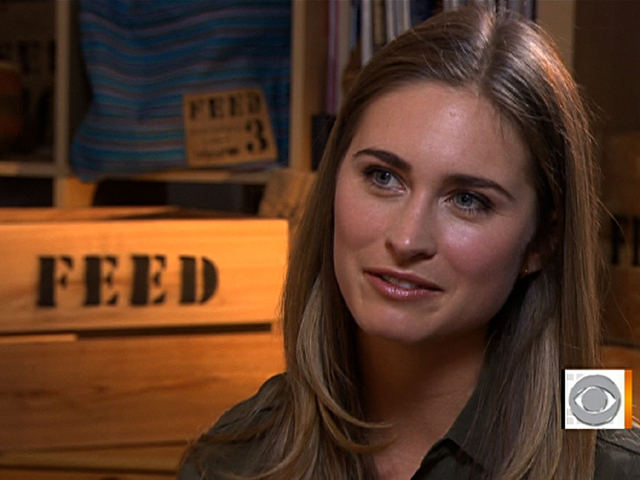 Lauren Bush was born into a political dynasty and, with her recent marriage to Ralph Lauren's son, David Lauren, she's now part of an iconic American fashion family, as well. But her true passion lies with one cause: combating world hunger through a company called FEED, which she co-founded at the age of 23.

It's a business that is also philanthropic, providing meals to hungry students worldwide.

A former model and a Princeton graduate, Bush Lauren's pedigree is high, "Early Show" contributor Katrina Szish reported. But, after spending the day with the 27 year old, Szish said she found a down-to-earth, easy-going woman who's made it her mission to help those in need.

With a laugh as contagious as her impromptu rhythm and rhyme, Bush Lauren might not take herself too seriously, but when it comes to combating world hunger, she means business.

Bush Lauren explained that, for every FEED bag sold, they're able to feed a child in school for an entire year.

S.C. Rescue: A Whale Of A Task

So what is it like being a relative of two U.S. presidents?

And that marriage potentially came with a new name: Lauren Lauren.

Did she ever have a moment when she was dating or first engaged when she thought, 'I'm going to be Lauren Lauren'?

"I know," Bush Lauren said. "Well, from the minute we started dating, that obviously was like the running joke. But Lauren Bush Lauren is the official name."

The couple wed in a rustic ceremony in Colorado, with the bride wearing an intricately beaded Victorian dress -- a one-of-a-kind original designed, of course, by her new father-in-law, Ralph Lauren.

The dress is said to have required 3,000 hours of hand sewing.

Bush Lauren said, "It just -- every layer just would take your breath away. It was -- it was beyond anything."

Bush Lauren said it was her fairytale moment. "There was even a carriage," she said. "I mean -- it really was a fairy tale."

But beyond the fairy tales and power of her name, Bush Lauren has dedicated much of her life to giving back.

When asked what she wants people to know about her, she replied, "To buy a FEED bag."

After graduating from Princeton, Bush Lauren conceived the idea after volunteering for the United Nations World Food Program.

FEED now sells a range of products, mostly online and in boutiques at different price points. The more expensive the item, the more meals it can provide.

What does she want to tell Americans who are lucky to have food on their tables about the rest of the world and those people who really are hungry?

"It's just another world," Bush Lauren said. "And we're lucky in America to have a bit of a safety net. You know, and that's not to say there (aren't) so many hungry even in New York City, where I live and work, one-in-six people relies on food assistance to get by. But to have food at your fingertips, to walk into a grocery store and be able to pick out what you want, is such a luxury. But abroad, 925 million people worldwide are living in hunger, and it's the world's largest killer. More than AIDS, malaria and (tuberculosis) combined.

In the five years since she started FEED, Bush Lauren's organization has provided more than 60 million meals to students worldwide.

Bush Lauren said, "I've sort of dedicated my life in a way to addressing those issues and addressing that disparity. And trying to close that gap a bit. And giving people an easy way and a fun way to give back."

For every FEED product sold, a specific number of meals is donated to someone in need. Depending on the country, it costs just $20 to $50 to feed one student for an entire year. For more information, visit the FEED website.