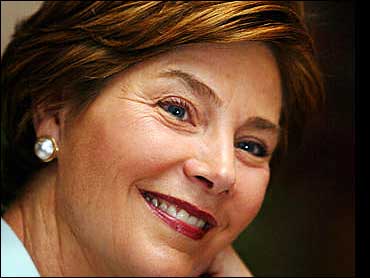 Former First Lady Laura Bush expounded on her acceptance of gay marriage on CNN's "Larry King Live" this week, explaining why she disagrees on the issue with her husband and why she thinks public opinion on the issue will change over time.

It would be a true reversal for former President George W. Bush to accept marriage as anything other than contract between a man and a woman, she said, but the issue deserves more debate.

"I think there are a lot of people who have trouble coming to terms with that because they see marriage as traditionally between a man and a woman," she said. "But I also know that, you know, when couples are committed to each other and love each other, that they ought to have I think the same sort of rights that everyone has."

She added that there's also a difference of opinion among generations.

In the new memoir she is promoting, "Spoken from the Heart," Bush says she asked her husband to refrain from making gay marriage a significant 2004 campaign issue.

"We have, I reminded him, a number of close friends who are gay or whose children are gay," she wrote, as quoted by Politico. "But at that moment I could never have imagined what path this issue would take and where it would lead."

Bush said on CNN that she also disagrees with her husband on whether Roe v. Wade, which protects a woman's right to an abortion, should be overturned by the Supreme Court.

Bush's new book details other revelations about her time in the White House. For instance, when Saddam Hussein's sons, Udai and Qusay, were captured, U.S. troops found pictures of the Bush daughters in their rooms.