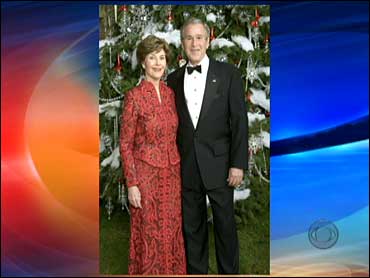 Every woman who's ever attended a formal party has had the same concern: What if someone else shows up in the same dress?

With guests in the spotlight at the exclusive White House receptions that go with the ceremony, the designer gowns are always scrutinized.

And on Sunday, four women at the reception wore the exact same $8,500 Oscar de la Renta dress, Mrs. Bush among them.

Letitia Baldridge, Jacqueline Kennedy's chief of staff and White House social secretary, says the gown was beautiful, but oh, what a faux pas!

"They all should have congratulated one another on their good taste and the fact that they could afford the dress. … Jacqueline Kennedy, when she was first lady, made sure, and her couturiers made sure, that nobody else wore that dress that season."

The real question, Assuras observes, is, how could this have happened?

"If you're paying (that) much for a dress," Assuras asks, "wouldn't you want to be confident you'll be the only one wearing it? Especially if you're the first lady?"

So, says Assuras, Mrs. Bush made an executive decision.

"She went upstairs and changed," Baldridge says. "Very easy for her to do. Very, the right thing to do. Take the heat off the other three women."

The first lady's office said the mid-course correction was a first, and that she and the president found it quite amusing.

Baldridge says, if she were one of those other three ladies, "I would have laughed and laughed and I would have said, 'Listen, I'm not going to stand next to her because I'm fatter than she is.' But, other than that, I think it's a hoot!"

This is an incident the White House isn't likely to forget anytime soon because, in this year's official presidential holiday photo that goes out all over the world, Mrs. Bush is wearing — that same red dress.

Triplets: Growing up in a set