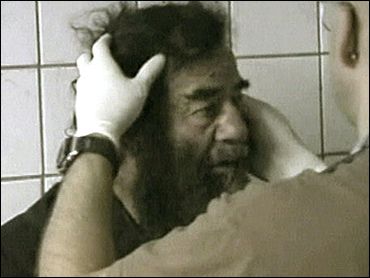 Deposed dictator Saddam Hussein may be feared and reviled by millions, but to late night talk show hosts, he's a gift from God. The Early Show Correspondent Tracy Smith stayed up late Monday night to watch.

On Comedy Central's "The Daily Show with Jon Stewart," Stewart joked: "Saddam Hussein has been captured and I'm sure by now everybody knows that, unless you were living in a hole."

It was like they hit the comic mother lode.

On the CBS "Late Show with David Letterman," Letterman noted: "Saddam Hussein just gave himself up. Hell, Michael Jackson put up more of a fight."

At the "Late Late Show with Craig Kilborn," Kilborn simply wondered: "Saddam Hussein, after he was captured got a full medical exam and treatment. How does it feel to know the 'Butcher of Baghdad' got a flu shot before you?"

All night, it was one laugh after another at Saddam's expense.

Letterman also brought out video of the capture: "Here's how they're trying to spin the capture of Saddam Hussein: On Saturday, U.S. troops captured Saddam Hussein, or is it? (Saddam's video was altered shown in a Santa outfit) Bush arrested Santa! (Followed by picture of Howard Dean) Paid for by Howard Dean 2004."

At "The Tonight Show with Jay Leno," Leno had his fun as well, showing a video of himself inspecting Saddam's mouth. Leno: "No weapons of mass destruction in there."

He even looked funny when they found him. And he was in a hole.

Leno: "He was captured in a hole under a farmhouse, the Iraqi version of 'The Simple Life.'"

Letterman's Top Ten: "And the No. 1 question asked by Saddam when he was captured: 'will you go easy on me if I tell you where Martha Stewart is hiding?'"

This isn't the first time Saddam has been the butt of late night comedy: He's made David Letterman's Top Ten lists since the last Gulf War. But his capture has given his legacy an ironic turn: a man who caused millions of people so much pain, now giving us all something to laugh about.

Stewart: "Doctors checked Saddam for lice and pronounced him a member of the 'Need-A-Bath' party. Heyoooo."

It may be the final humiliation for Saddam, whose regime is ending not with a whimper, but with a gag.

Jimmy Kimmel from ABC's Jimmy Kimmel Live: "They got him. They captured Rupert from Survivor, there he is. ( Picture of Saddam.)"

How to Surveillance-Proof Your Hotel Room

Missing Money: Where and How to Recover It