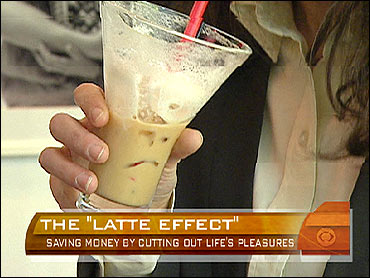 The "big squeeze" is putting a big pinch in everything from lunch to lattes.

As the economy continues to spiral, many people are being forced to cut back on small discretionary purchases -- life's little indulgences -- because doing that can result in big savings, since those little buys really add up, reports CBS News correspondent Bianca Solorzano.

"This was coined about 10 years ago and it's called 'the latte effect' -- people who spend money on the little things every day don't realize how much it can add up over time," says BusinessWeek magazine Personal Finance Editor Lauren Young.

Illinois small business owner Cindy Eagle is cutting back on small pleasures for the first time in her life.

"I realized," Eagle explains, "the stock market was down, and the amount of money I thought I had to last me for the rest of my life was significantly less."

For more than two months now, Eagle's been consciously and creatively saving. Instead of buying cards, she makes her own on the computer. And forget fine dining.

"The best things in life for me, and probably for most Americans, are free," Eagle remarks, "like a bike ride, a movie at home with someone you love, hugging your child or your grandchild -- all of these things, they cost nothing."

Eagle is cutting back on everything from to gifts to gas to groceries and expects to save more than $2,800 dollars per month and close to $40,000 over the next year.

And Eagle's far from alone in thinking twice before buying.

"We don't go out to dinner as much," one man told CBS News. "We're going through the Sunday paper (for coupons), looking for really good deals," said another.

"Why are we in this predicament?" Newsweek's Young asked. "Well, the economy is not so good right now, and we have not really stopped spending that much."

Young says there are a lot of easy ways to save, such as bringing your lunch to work, checking DVDs out of the library instead of renting them, carpooling at least one day a week, and doing your own nails at home, rather than getting them done at a salon.

It may be tough at first to pass on life's little perks, Solorzano notes, but just remember: Small changes can add up to much bigger savings.

She adds that financial advisers suggest writing out all the things you spend money on -- that makes it easier to spot ways you can cut back.