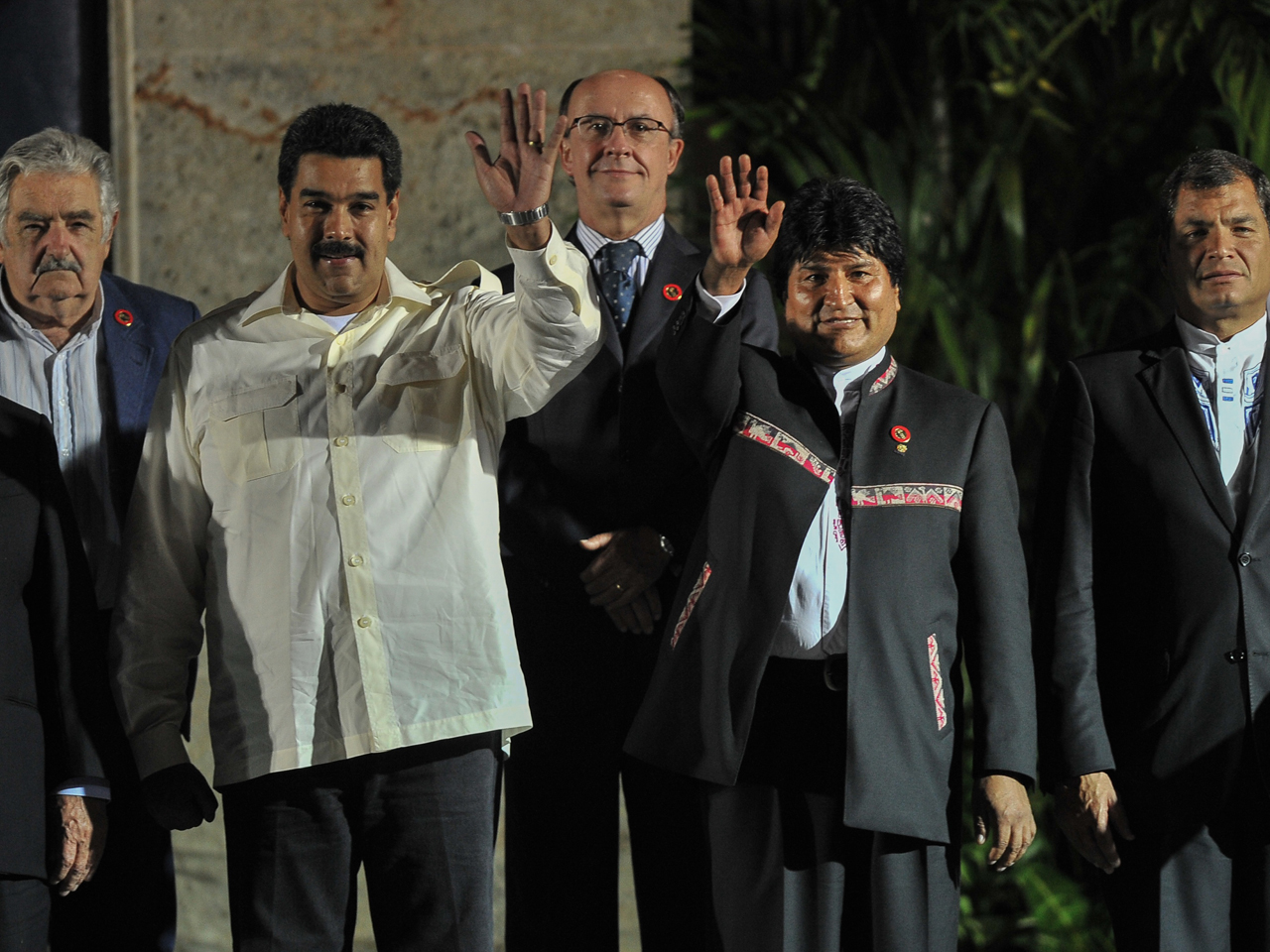 HAVANA, Cuba -- Thirty-three countries from Latin America and the Caribbean are winding up a two-day summit in the Cuban capital Wednesday with the noteworthy absence of the United States and Canada.

The second Summit of the Latin America and Caribbean Economic Community, known by its Spanish acronym CELAC, is focused on regional integration, the purpose behind its creation in 2011. And on its last morning, the heads of state or government signed a "zone of peace" accord, vowing to reject the use of arms and behave as respectful neighbors in conflict resolution.

Further, the joint declaration, read by Cuban President and outgoing CELAC chief Raul Castro, says the nations of the hemisphere are committed to nonintervention in each other's internal affairs, to cultivate cooperation and friendship and to fully respect "the inalienable right of every state to choose its political, economic, social and cultural system as an essential condition to guarantee peaceful co-existence among nations."

In his speech to the gathering, Colombian President Juan Manuel Santos praised this declaration adding: “And speaking of peace, I want to thank in a very special way the support of all of you to the peace process that we have been moving forward in Colombia. (And) to thank Cuba because Cuba is helping us and in what a manner, serving as host for this process."

Santos added: "We have advanced as never before in the negotiations with the FARC [Revolutionary Armed Forces of Colombia], already finishing two of the five points we have agreed to. There remains a difficult path to follow but if you ask me today if I am more optimistic than I was when we spoke about this topic in the last CELAC summit a year ago, I would say yes, I  am more optimistic."

In their speeches, many of the regional leaders spoke of the need to deal with economic problems and eradicate inequalities. Some of the more left-leaning figures railed against "savage capitalism" and imperialism, and others voiced support for Argentina's claim over the British-controlled Falkland Islands. Venezuelan President Nicolas Maduro urged Puerto Rico's independence from the United States.

The Washington-based Council on Foreign Relation's Julia Sweig, who visited Cuba two weeks ago as the island prepared for the international event, believes it could represent a turning point.

"I can't imagine a return to the old pattern of Washington dominating the Inter-American system,” Sweig said. “I'd like to imagine that the Obama administration has the imagination and creativity and confidence to adjust to the new Latin America of foreign policy independence and vastly less deference to Washington. The White House has a choice: throw up its hands and opt for a focus on its bilateral relations with individual countries in the region, or try to accommodate the region's new multilateralism -- one that emphatically includes Cuba.”

In an article written for a Brazilian newspaper, Sweig highlighted the role President Dilma Rousseff is playing in this new scenario. On Monday, Rousseff and Cuban President Raul Castro inaugurated a container terminal in a new deep water port some 45 miles west of Havana. Built at a cost of over $950 million, the BNDS-backed Odebrecht investment, it represents just one aspect of the part Brazilian capital is playing in Cuba, Sweig said. She notes investments in sugar cane, soy, corn, tobacco and pharmaceuticals.

It's an example of the kind of economic cooperation that CELAC hopes to encourage throughout the region but it doesn't necessarily exclude working with the United States.

Sweig says that during her Council on Foreign Relations-organized visit to the island, she "heard a clear and explicitly stated interest in cooperation with the United States", between governments, business and society.

Among the distinguished observers at the summit are Organization of American States chief Jose Miguel Insulza and UN Secretary General Ban Ki-moon. Insulza is the first OAS official to visit Cuba since 1962, when Cuba was kicked out of the organization. He was invited by President Castro to attend as a courtesy.

On Tuesday Ban, who met with former Cuban President Fidel Castro earlier, told the press covering CELAC that human rights was among the topics he raised with them.

"The issue of human rights is one that I always discuss with world leaders when I meet them. During my meetings with the leadership of the Cuban government, I discussed this matter. As you know, I emphasized the importance of playing a greater role in enhancing human rights, and providing spaces for people's right to peaceful assembly and association, and cases of arbitrary arrests that occur in Cuba," he said.

At the end of the summit, Cuba will turn over the rotating CELAC presidency to Costa Rica.