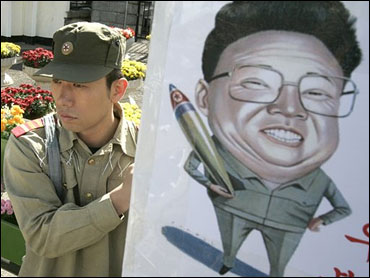 Surveillance aircraft sweeping Asian skies for a hint of krypton or a sign of strontium have deepened the mystery over North Korea's claimed nuclear explosion. Was the blast that rocked global politics an atomic fizzle, a mini-test, or simply the thunder from hundreds of tons of TNT?

A senior U.S. administration official said Friday that one of a number of tests of samples was consistent with a nuclear explosion, but no definitive conclusion had been reached.

Earlier in the day, a U.S. government intelligence official said initial air sampling in the area Tuesday by a specialized U.S. WC-135 aircraft found no evidence of the radioactive particles produced by successful nuclear explosions. Chinese and Japanese monitoring also has detected no telltale evidence.

Both U.S. officials spoke on condition of anonymity because of the sensitive nature of the information.

Experts outside government played down the significance of the largely negative findings, and dismissed the idea the test might have been a fake staged with conventional explosives. At the United Nations, meanwhile, diplomats may vote Saturday to impose sanctions on North Korea as punishment for the seeming nuclear escalation.

Studying the few scraps of information available, specialists did warn that prolonged uncertainty over just what happened last Monday inside a North Korean mountain could lead to misperceptions and a potentially dangerous backlash.

"If the North Koreans fear that we perceive it didn't work, will they fear American military action more than before?" asked George Perkovich, of Washington's Carnegie Endowment for International Peace. "And in that case, do they rush into another test, or what?"

"Was it a fizzle? Did they really want to have something small and got something smaller than expected? Why did they do that? How will they (North Korea) react if it didn't work?" asked the Stanford University professor, who has made 14 trips to North Korea since 1987 and visited its nuclear sites.

The smaller scale might indicate a problem in the complex detonation process, presumably of an "implosion" model using a plutonium core encased in a sphere of conventional explosives.

Experts also differ over whether the explosion, believed to have been carried out in a sealed horizontal shaft deep underground, would necessarily have vented radioactive particles into the atmosphere. The North Koreans said it hadn't.

Nuclear fission explosions produce such highly radioactive "fallout" byproducts as strontium-90 and cesium-137 that can be spread by wind. But for decades, before suspending nuclear tests in 1992, the United States successfully sealed even major tests to contain such emissions underground, noted Robert S. Norris, a nuclear specialist with the Natural Resources Defense Council in Washington.

With the seemingly smaller North Korean test — or partial detonation — "I wouldn't expect there to be any seepage," he said.

Albright said, however, that another kind of byproduct, "noble gases" such as krypton and argon, which don't react with other chemicals, would inevitably seep out of a test site and could be detected.

He said he had learned from reliable sources, meanwhile, that the United States conducted another air-monitoring sweep after the Tuesday flight, but those results were not yet in.

Both Albright and Norris dismissed the suggestion the Pyongyang government may have faked a nuclear blast with ordinary explosives.

"It seems outlandish to me that they would transport hundreds of tons of explosives, a substantial number of truckloads, through a very rugged part of North Korea in an attempt to fool the world," Norris said. Satellite surveillance would have spotted such activity, he said.

In the end, in the eyes of the world, Lewis said, "It doesn't matter."

"They said it was a nuclear explosion and they pre-announced they were going for a nuclear explosion, and that's enough to say they crossed a red line and warrant the kind of reaction they're getting on the part of the world's governments," he said, referring to Saturday's expected U.N. vote.

Even the South Koreans, who often favor a softer line toward the North, sounded a similar note Friday.

"Whether the test they conducted was really a nuclear explosion test or not, I think we have to take their determination very seriously and we have to respond in a way that is proportionate to the seriousness of the situation," Chun Yung-woo, South Korea's chief negotiator in the North Korea nuclear impasse, told The Associated Press in Seoul.