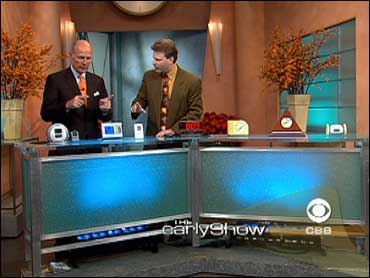 We "fall back" this weekend, setting our clocks back an hour with daylight-saving time ending.

That gives us all an extra hour's sleep, but BestStuff.com Senior Editor David Gregg, who also serves as The Early Show's gadget guy, felt it would be timely to look at some of the newest alarm clocks to help get us wake up.

Now you can wake up every morning feeling rested and invigorated. The Homedics SS-5000 Sound Spa Projection Clock Radio with Atomic Clock and Indoor/Outdoor Temperature lets you create your perfect sleep environment, while also helping you to ease into your day. At night, set the sound machine to emit a soothing level of white noise to help you relax and slip into a restful night's sleep.

When it's time to wake up, you can set traditional beeping or radio wake-up alarms, or choose from six gentle nature sounds, including ocean, waterfall, summer night, rainforest, thunder, and rain. MSRP: $49.99; homedics.com

Not only does this weather station have a full-color display, it's also easy to operate. Photo image animations are brilliantly displayed with accompanying sound effects. This multi-channel station monitors temperature, humidity, and automatically sets itself to the U.S. Atomic Clock. Advanced settings such as photosensitive dimmer and weekend alarm settings included.