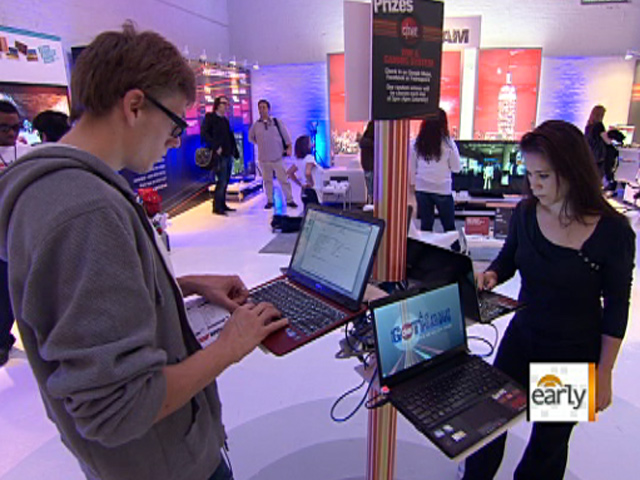 Just in time for the start of the holiday shopping sprint, the editors of CNET have descended on the Big Apple, showing off some of the latest, hottest tech products, from smart phones and televisions to tablets and laptops, giving New Yorkers a chance to get up-close and personal with the devices.

CNET Editor at Large Brian Cooley took a quick look around at the showcase and showed "Early Show" viewers some of the highlights:

What we did was take over a cool art gallery, the Openhouse Gallery, and turn it into kind of a tech playground, but with a real purpose -- to enable folks to get their hands on the latest technology.

The response has been great. We've had a steady stream of people coming through the door, lots of great questions. And when you think about it, it's a real advantage for shoppers who will spend hundreds, maybe thousands of dollars on tech gifts this holiday season. To be able to see and touch and feel these products and get a real good sense of how they work, how they look, makes a big difference.

The horse race is pretty simple. It's iPhone vs. Android right now. The iPhone 4s just recently came out, and it's an outstanding phone. It has a camera built in. It takes pictures that are so good I would prefer to have this than a 4- or 5-hundred dollar compact pocket camera.

But the Android phones are outselling the iPhone now, which a lot of folks don't realize. There are so many Android models ... versus just two models of iPhone. That's part of the reason. And the Androids are on every single carrier.

Androids have much bigger screens. ... The amount of real estate ... is fundamentally different. And if you want a real keyboard like I use, with the actual keys, you gotta go Android.

Smart phones all do the same thing, basically. Find one that works for you.

This is different from the smart phone world, where the iPhone has serious competition. There isn't any serious competition for the iPad. Not yet. What's coming, which is very interesting to watch, we have new tablets, from Amazon and Barnes and Noble. Amazon has one called the Kindle Fire. Two hundred dollars. It's a 7-inch tablet. It's going to have somewhat simpler technology in it. You're also going to find the Barnes and Noble Nook tablet in about the same price range, 249 dollars. It tends to lean a little more on specs, which I don't think consumers care (as much) about this season.

The new tablets hare half the price or less than the least expensive iPad - that's the first thing on consumers' minds.

And the seven-inch size is smaller than the iPad's 10-inch - a pretty good-sized device - you're not gonna pocket that.

The biggest screen yet - it's really cool for the holidays -- is good old television, but very different is something we call connected TV this year. All it means is you use your existing home broadband, cable, DSL, whatever, to stream full-screen television to your TV.

TVs are always the perennial around the holidays, because they are really the tech gift you give to family; everything else is personal in many cases.

The three choices you've got to make though on a TV: plasma, LCD and the newest one: LED. It's a matter of getting the best picture for the best price, and right now the difference between the plasmas and the LED/LCDs is pretty narrow.

LEDs change the illumination of the TV. All TVs have to get their light from somewhere. These new TV sets have LED bulbs, like in one of those pocket flashlights, behind the picture. It enables the screen to be thinner and use less power.

If you get one of the latest of the LED TVs, (they can be so thin they're only) about a little over an inch. This is one of the few features of TVs that people love that they don't even need the TV turned on for, and that's an LED/LCD thing.