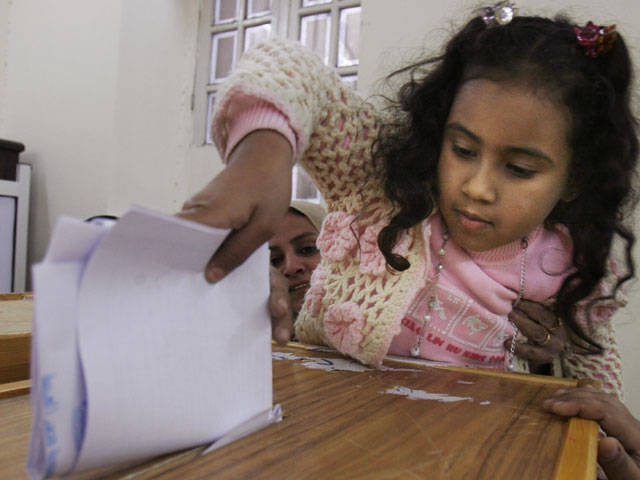 CAIRO - Islamists and liberals made accusations of abuses during the second round of Egypt's first post-Hosni Mubarak parliamentary elections as voters cast ballots Thursday in mostly rural parts of the country.

Most of the reports accused election officials at a number of polling stations of filling out ballot forms for elderly or confused voters. If confirmed as a pattern, the reports could chip away at the credibility of what has so far been modern Egypt's most free and fair vote.

In response, judges stationed at polling centers said the election law permits them to provide help to voters who need it. And the head of the election commission called accusations of irregularities "rumors and lies."

During Mubarak's nearly 30 years in power, elections were systemically manipulated and voters were on many occasions turned away from polls while supporters of the ousted president's now-dissolved National Democratic party were rigging the vote to ensure the NDP dominated every parliament.

Two alliances led by Islamists won close to 70 percent of seats in the first round on Nov. 28-29, according to an AP tally compiled from official results. The secular and liberal forces that largely drove Egypt's uprising against Mubarak were trounced, failing to turn their achievement into a victory at the polls.

The second round of voting, which took place Wednesday and Thursday in nine provinces, and a third round to be held in early January are not expected to dramatically alter the result and could even strengthen the Islamists' hand. Rural areas in Egypt are traditionally more conservative, and some are Islamist strongholds.

The elections will lead to the formation of a parliament that in theory will be tasked with selecting a 100-member assembly to draft Egypt's new constitution. Liberals fear that an Islamist-dominated parliament might result in an Islamic constitution, setting the new Egypt on the path of more religious fundamentalism.

The Muslim Brotherhood's political arm, which is leading the polls, and an alliance of liberal youth parties have filed complaints, saying officials at several stations were "dictating to voters whom to vote for."

The Islamist group issued a report Thursday accusing judges in the province of Beheira, 180 kilometers (112 miles) north of Cairo, of guiding voters to select candidates from the ultraconservative Salafi Muslim party called Al-Nour, the Brotherhood's key Islamist rival, which is in second place in results so far.

In another polling center, two judges, a school administrator and a village mayor filled in ballots for candidates who were members of Mubarak's dissolved National Democratic party and are now running as independents or members of new parties.

The Brotherhood's statement quoted an official at a polling station as telling voters that it's "enough what Freedom and Justice got so far."

It was difficult to say how widespread any abuses or irregularities were, but more allegations surfaced in the second round than in November. Among other problems, parties continued to campaign outside polling centers in violation of the election law, which imposes 48 hours of campaign silence before polls open.

Election commission chairman Abdel-Moez Ibrahim denounced the accusations as "rumors and lies," and added that officials at polling stations were there "to serve their country."

"They work day and night, and their hands are clean," he said late Wednesday.

Meanwhile, in Cairo's Dokki district, officials at polling centers flooded with ultraconservative Islamist party banners were seen filling out ballot papers for voters, according to a statement by a liberal and secular youth party called The Egyptian Current.

Another secular alliance of mostly liberal youth parties, Revolution Continues, said its representatives in the Suez Canal city of Ismailia were kicked out of polling centers after complaining that officials there were "dictating to voters whom to vote for."

Nashwa el-Houfi, an independent candidate and a journalist, gave a detailed account of a judge marking ballots on his desk inside a polling center. El-Houfi told the private Egyptian TV network CBC on Wednesday that she tried to take a picture of the judge when he refused to stop marking the ballots. The judge later held el-Houfi inside the polling center after closing its doors and summoned police.

On Wednesday, an Associated Press reporter saw an official overseeing the vote in Giza's impoverished Kerdassa district filling out a ballot for an old man. When the judge noticed the reporter, he shouted to the voter: "Why are you here, old man, if you don't know whom to vote for?"

Judge Ahmed Helal, who was monitoring the voting at a polling station in Shebein el-Kom in the province of Menoufia, 60 kilometers (40 miles) north of Cairo, said it was his legal duty to assist people who cannot mark ballots on their own. According to an official Cabinet report in June, illiteracy in Egypt is nearly 27 percent of the country's 85 million people.

"It's the law that we have to help the voter to vote in case they are incapable or cannot see," he said. "We tell them what's on the ballot and they tell us how they want to vote."

Helal held a copy of the election law, which included a clause that said it is the legal right of judges to assist voters when needed. It specified, as an example, that judges can mark ballots for the blind.

Another judge, Mohamed Omar, who has been among those required to oversee elections for several years, said he believed judges should not be involved in politics.

Judges should be "far away from elections" and not be asked to monitor them to ensure the judiciary remains independent from the political process, he said.