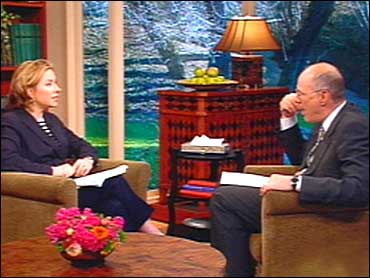 Seasonal allergies affect almost a third of Americans, and a long winter means the spring allergy season is likely to hit with a vengeance this year.

Medical correspondent Dr. Emily Senay explained on The Early Show that the that seasonal allergies are also known as allergic rhinitis or hay fever. They are caused when the immune system overreacts to irritants in the environment — primarily from plant, tree pollen and mold spores.

She says each season brings a different irritant. In the spring, it's tree pollen. Some of the usual suspects include cedar, elm, maple, birch and oak trees.

In the summer, the culprit is mainly grass. In the fall, weeds causes allergy attacks. Winter is the only season when we get a break from allergies.

An extended winter makes the spring allergies worse, says Dr. Senay. Tree pollen, which is released into the air as tree bud and bloom in April and may, normally arrives in stages as different tree bloom at different times. But this year, trees delayed in blooming by cold weather are releasing their pollen at the same time as the later blooming trees. So it is all getting dumped on us at once. And the delay may also mean that trees will still be releasing pollen right up to the summer months, when grass begins to cause allergy problems.

Allergic reactions range from mild, such as sneezing, to more serious and potentially life-threatening problems, such as asthma.

Dr. Senay says skin irritations and breathing problems can also develop. Although many of these symptoms are relatively mild, over time they can cause fatigue, insomnia and problems with concentration and work performance. They can also increase the risk of ear infections and sinusitis.

It is difficult to prevent allergies, but it is useful to get a test to determine exactly what you're allergic to. And then take steps to avoid contact with the allergenic as much as possible. Do so by staying indoors as much as possible (keeping your house clean), keep your windows closed, wash bedding regularly, wash your hair and shower before going to bed.

If you can't avoid allergy irritants, there are also a number of drug treatments available over-the-counter and by prescription — including nasal steroids, antihistamines and decongestants. But you should talk to your doctor to find the best treatment, suggests Dr. Senay.

Antihistamines can be very helpful for itchy eyes and runny nose, but they may not relieve nasal congestions. And some can also cause drowsiness though there are some less-sedating ones, such as Claritin, available over-the-counter.