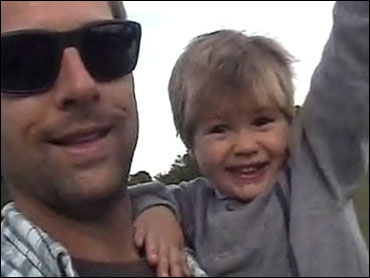 A New Jersey father has his hopes pinned on Brazil's chief justice, praying he will regain custody of his son after a five-year court battle in time to spend the holidays with the boy - in the United States.

David Goldman also said he would allow 9-year-old Sean's Brazilian relatives to visit with his son if he wins the case.

"It's my hope we'll have ... the holidays and New Year's and a very long, happy, healed life as father and son - at home," Goldman told The Associated Press in an exclusive interview Sunday. "My whole family and Sean's whole family have been waiting, agonizing for over five years to be reunited with their grandson, with their cousin, with their nephew, with my son."

Late Sunday, the Supreme Court said in an Internet statement that Chief Justice Gilmar Mendes would rule Monday on appeals made by Goldman and Brazil's attorney general seeking to lift a stay on a lower court's order that Sean be handed over to his father.

If Mendes lifts the stay, lawyers in both camps said, Sean's Brazilian relatives could still appeal to the nation's highest appeals court - but it was questionable whether that court would be willing to review the case if the Supreme Court backs a lower federal court ruling awarding custody to Goldman.

But a source requesting anonymity now tells CBS News Mendes won't rule until Feburary, meaning David Goldman will have to return to the U.S. without Sean.

Goldman launched his case in U.S. and Brazilian courts after Sean was brought by his mother in 2004 to her native Brazil, where she then divorced Goldman and remarried. She died last year in childbirth, and the boy has lived with his stepfather since.

The lawyer for the boy's Brazilian family offered to negotiate a settlement, and the family also invited Goldman to spend Christmas with them. Goldman did not say whether he would accept the invitation if the case was not resolved this week.

Asked if Sean's Brazilian family would be able to visit the boy, Goldman said yes. "I will not do to them what they've done to Sean and me," he said.

The case has affected diplomatic ties between Brazil and the U.S., reaching talks between President Barack Obama and his Brazilian counterpart, Luiz Inacio Lula da Silva. A U.S. senator, reacting to the case, has blocked the renewal of a $2.75 billion trade deal that would lift tariffs on some Brazilian exports.

The U.S. State Department pressed for the boy to be returned. But a Brazilian Supreme Court justice on Thursday stayed a lower court decision ordering Sean to be turned over to his father.

Goldman and Brazil's attorney general both filed appeals Friday asking the Supreme Court to overturn the justice's decision to block Sean's return while the court considers hearing direct testimony from the boy.

The Brazilian family's lawyer, Sergio Tostes, told the AP he would like to see a negotiated settlement, saying he wanted to end the damage being done to Sean and to U.S.-Brazil relations.

"We're raising the white flag and saying: 'Let's get together, let's talk. We're the adults, we have responsibilities, so let's start to have a constructive conversation,"' Tostes said.

Goldman, however, was in no mood to negotiate.

"This isn't about a shared custody - I'm his dad, I'm his only parent," Goldman said. "This isn't a custody case - it's an abduction case."

After many disappointments, Goldman said he was taking nothing for granted.

"Until my son and I are on a plane together and those wheels are up, I'll be no less determined and no less hopeful for that day to come," he said.

He said he can't wait to make up for lost time.

"I have five years of love to give him, so he's going to get an extraordinary amount," Goldman said. "With love and patience, we will heal."