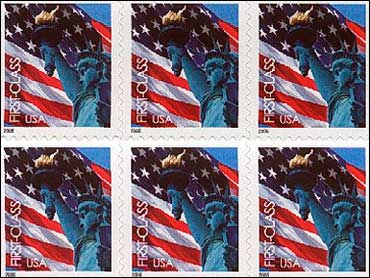 It will cost a bit more to mail letters and parcels starting Monday. A first-class letter will go up 2 cents to 41 cents.

But there is also some good news — folks will be able to buy "forever" stamps that remain valid regardless of any future increase.

While the new rates take effect Monday, most post offices are closed on Sunday so officials say items dropped in a box that won't be collected until Monday should have the higher postage on them.

On the other hand, when rates change the agency usually allows a little leeway, and it doesn't plan a rash of returns for insufficient postage.

Postmaster General John Potter has said that even with the higher prices the agency expects a deficit this year as it struggles to compete in a swiftly changing communications market.

For most people, the first-class rate has the greatest impact, covering cards and letters.

While the first-class rate will rise from 39 cents to 41 cents for the first ounce, people sending heavier letters — such as wedding invitations — will see a reduction in the price. That's because each additional ounce will cost just 17 cents, down from the current 24 cents. That means a two-ounce letter will cost 58 cents to mail, compared with 63 cents now.

Also expected to be attractive to many people is the forever stamp.

(Virtual Stamp Club)
The first forever stamps are selling for 41 cents apiece, but they won't have a price printed on them and they will remain valid for sending a letter regardless of any future increases.

While a forever stamp will always be valid for mailing a latter, that doesn't mean the price won't go up. If rates were to increase to 45 cents, for example, that's what a forever stamp would sell for. But stamps already purchased at a lower cost could still be used without adding extra postage.

International rates are also going up.

Letters to Canada and Mexico will rise to 69 cents and to most other countries to 90 cents. Other international services are being redesigned to more closely resemble domestic rates, and the charges will vary by country.

When the new prices go into effect the fundraising stamp for Breast Cancer will increase to 55 cents. It is valid for first-class postage with the excess charge used to support research into breast cancer.