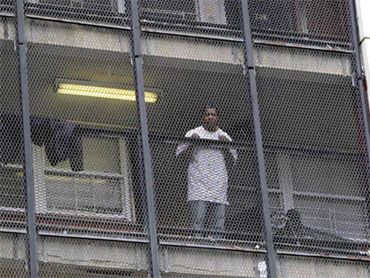 For decades, Chicago's infamous Cabrini-Green high-rises — with their fenced-in balconies and horrific high-profile crimes — were a symbol of the failure of public housing in America.

Their closure this month ends an ugly era. But for the last of the Cabrini residents moving out, the shuttering also marks the start of an uncertain time. While some families who have already left the complex are faring better, it's still difficult to track whether the plan to overhaul Chicago's public housing is improving the lives of those low-income families relocated.

More than 1,700 families have been moved from Cabrini-Green since the Chicago Public Housing Authority's sweeping "Plan for Transformation" started in 2000. With just one building set to fall, a federal judge has given the two remaining families at Cabrini's last high-rise until Dec. 10 to move out.

"Are people better off? That's still an open question," said D. Bradford Hunt, a Roosevelt University social science professor who's written a book about public housing in Chicago. "Some people are worse off. For some people, not much has changed. And some people are better off. The question is what percentage, and we don't know that."

About half of the Cabrini residents who have relocated live in homes that are still close to their old complex, the Housing Authority said. The rest are scattered across the region.

Mary Johns, editor of the Residents' Journal, a publication produced for and by public housing residents, said crime reports suggest some of the neighborhoods where residents have moved are as dangerous as Cabrini had been.

Cabrini initially was hailed as a salvation for the city's poor and was emulated nationwide. But the 70-acre development quickly decayed into the kind of place where children were gunned down on their way to school, or sexually assaulted and left for dead.

The development started on Chicago's North Side in 1942 with row houses named for St. Frances Xavier Cabrini, the Roman Catholic patron saint of immigrants. A few years later, high-rises and mid-rises were added. Eventually, Cabrini housed as many as 13,000 people.

But the buildings weren't well-maintained, and crime, gangs and drugs soon became rampant.

The complex drew national attention in 1981 after a gang war killed 11 residents in three months. Then-Mayor Jane Byrne and her husband moved into a Cabrini apartment for three weeks to publicize her efforts to clean up the area.

In 1992, a Cabrini resident hiding in a vacant 10th-floor apartment shot and killed 7-year-old Dantrell Davis as he walked to school holding his mother's hand. Five years later, a 9-year-old girl known as Girl X was found raped, choked, poisoned and left in a stairwell with gang graffiti scribbled on her body.

The Housing Authority developed a sweeping plan to overhaul public housing and move away from the high-rise model of warehousing the poor.

The last Cabrini high-rise is slated for demolition in January or February.

Mixed-income townhouses, shops and other redevelopment will go up in Cabrini's place, erasing from the landscape the island of poverty that the high-rises had become. Cabrini sits literally in the shadows of downtown's gleaming skyscrapers. A few blocks east or west, handbags sell for more money than Cabrini residents pay in rent for a year.

Alther Harris, 67, has lived in Cabrini for more than 30 years and considers it home. She moved to Cabrini's last high-rise a year ago from a building that has since been demolished. She said the series of recent moves have been "very, very stressful."

"You can't clean up right, you can't cook right, you can't eat right because you know that day is coming," said Harris, who lives with her daughter and three grandchildren. "It keeps a person's mind confused not really knowing what's coming next."

The housing agency said in a statement late Tuesday that it was "continuing to work with the remaining families" at the last building, including those who have resisted the move.

Harris is being moved to a nearby public housing townhome with three bedrooms. She said it's too small for her family, but she doesn't have much choice.

Former Cabrini residents also have been offered vouchers for private apartments. And housing officials said they would be able to return to the Cabrini area once the new buildings are done.

Kenneth Hammond said the townhome he was offered wasn't done being rehabbed and had boards on its door and cracked windows. The private apartment he and his family were shown looked nice during the day, but the neighborhood turned unsafe at night, he said.

"What we as residents want to do is be accommodated right and leave the building with pride and dignity," Hammond said. "We just want to be treated fairly."

Brenda Lockett can sympathize with residents who don't want to leave the high-rises behind. She remembers being terrified when first told that she'd have to move, and she pledged to hold onto the building's beams as it was being demolished.

But six months after moving into a townhome with her husband and three youngest children, she said she couldn't be happier.

"We moved from the pit to the palace," she said. "I can live here until I get old and gray."