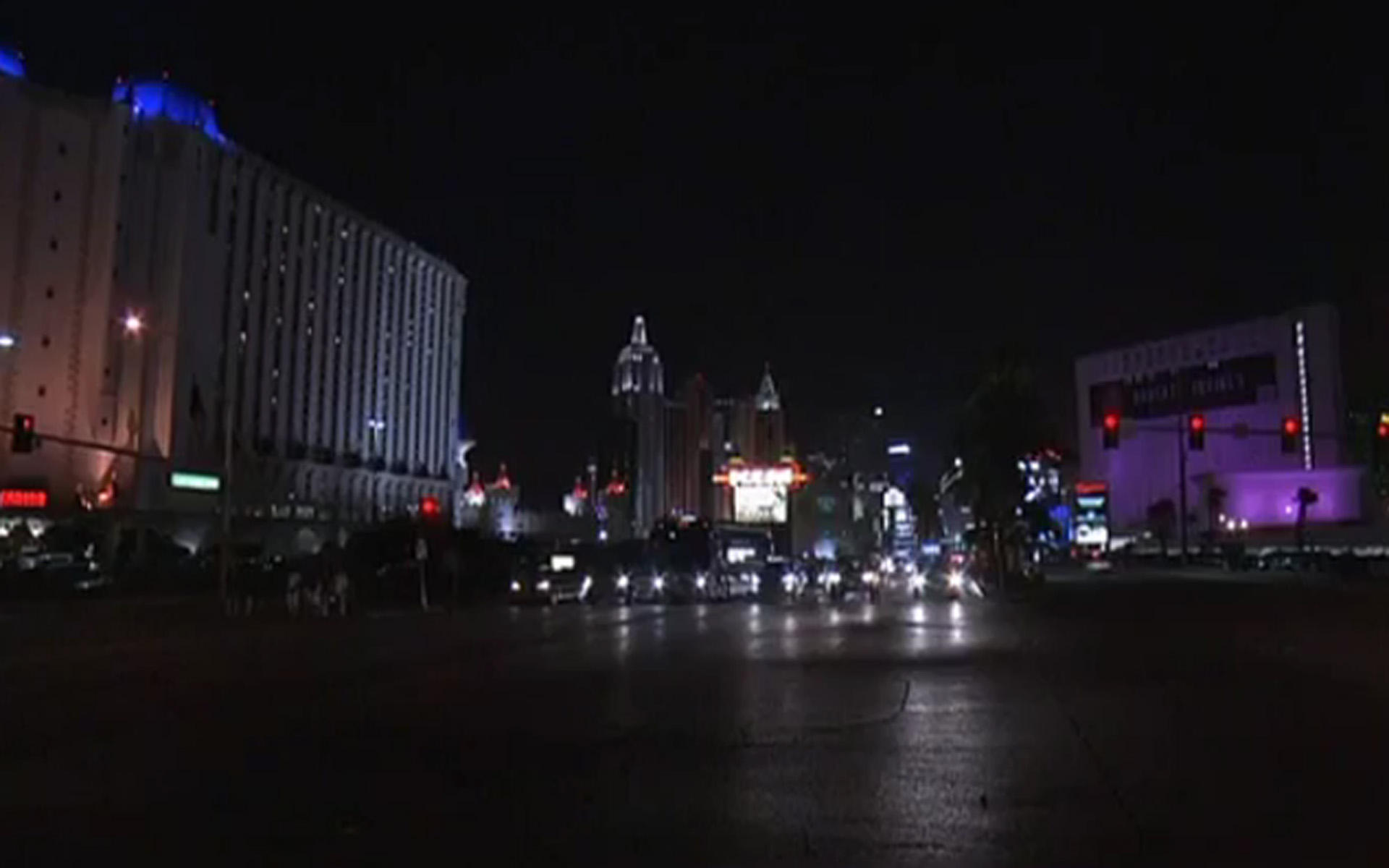 LAS VEGAS – Many of the Las Vegas Strip's bright lights dimmed at 10:05 p.m. Sunday – exactly a week since a gunman opened fire, killing 58 people and wounding almost 500 at a country music festival.

Most casinos along Las Vegas Boulevard darkened their marquees briefly in tribute to the victims. Officials say more than 50 other properties around town also took part in the memorial.

Earlier, hundreds showed up for a vigil marking a week since the massacre.

Also, KLAS says country music star Jason Aldean – the headliner of the Route 91 Harvest Festival that gunman Stephan Paddock fired on -- visited University Medical Center on Sunday. Many victims were brought to that facility. Aldean was performing when Paddock attacked.

The Strip was also darkened after the Sept. 11 terrorist attacks in 2001.

Federal investigators returned to search Paddock's home Sunday, and the officers who raided his hotel room door the night of the shooting gave a harrowing account of a barricaded door they had to bust through and the booby-traps they feared they'd find.

The search of Paddock's three-bedroom house on a cul-de-sac in a retirement community in Mesquite, Nevada, was for "re-documenting and rechecking," said local police Chief Troy Tanner, who accompanied FBI agents as they served the search warrant.

"I don't think they are after anything specific," Tanner told The Associated Press. "They're going through everything and photographing everything again."

The home was first searched Monday by Las Vegas police, who said they found 19 guns and several pounds of potentially explosive materials at the house that Paddock bought in early 2015.

Meanwhile, the makeshift SWAT team of police officers who made it to Paddock's door at the Mandalay Bay hotel casino 12 minutes after the first shots were fired described how they got there and the "gun store" they found inside in an appearance on the CBS News broadcast "60 Minutes" Sunday night.

One of them said he hurried from police headquarters to the Mandalay Bay in cowboy boots and ditched them before ascending to the 32nd floor in search of the gunman.

"I just threw them in the casino," Detective Matthew Donaldson said. "That was slowing' me down. I was faster barefoot, and I was gonna be more effective barefoot."

The officers said they heard reports of gunmen on both the 29th and 32nd floor, so "we're thinking multiple shooters at this point," Sgt. Joshua Bitsko said.

They zeroed in on the 32nd floor after Paddock unleashed about 200 rounds at a security guard outside his door.

When they got to the stairwell door on that floor near Paddock's room, they found he had taken special measures to slow them down.

"He had screwed shut the door - with a piece of metal and some screws," Bitsko said. "Cause he knew we'd be coming out that door to gain entry into his door. So he tried to barricade it as best he could."

But another officer had a pry bar and was able to easily pop it open, Bitsko said.

Authorities would later reveal that Paddock had surveillance cameras rigged inside and outside his room. But the officers didn't know that at the time.

"There's a room service cart with wires going on it underneath the door," Officer Dave Newton said. "There was something black on top of the cart. So initially I'm, you know, I'm thinking, 'This is a booby-trap. It's, it's going to explode."'

Bitsko and Newton are K9 officers who had been training dogs when they got the call about Mandalay Bay. They said they were at a disadvantage approaching because "he knew we were coming and we were going to have to come through," Newton said. "We didn't know where he was going to be in that room."

Bitsko said it was "like a deadly game of hide and seek," and thought " 'Man, I wish I had my dog with me,' because, you know, it's nice to have him lead a team."

It turned out Paddock had already shot and killed himself when they finally entered.

Inside, Newton said he found "so many guns. So many magazines. Stacks and stacks of magazines everywhere. Just in suitcases all neatly stacked against pillars, around the room, all stacked up, rifles placed all throughout. All kinds of monitors and electrical equipment he had in there. It just looked like almost a gun store."

Also Sunday, authorities began returning the baby strollers, shoes, phones, backpacks and purses that have been strewn for days across the huge crime scene that a week ago was home to 22,000 country music fans at the Route 91 Harvest festival.

Federal agents have spent the week collecting evidence amid the thousands of items that were abandoned in panic, some of them stained with blood.

"Whatever was dropped when people started running, those items we're collecting and we're going to provide back," Paul Flood, unit chief in the FBI's victim services division said at a news conference.

The items have been catalogued with detailed descriptions, and some have been cleaned of things including blood. They are now being returned to people at the Las Vegas Convention Center, starting with a few sections of the concert scene and expanding to others at a time to be announced later.

Las Vegas hotel and gambling magnate Steve Wynn, who owns casinos that Paddock gambled in but not the Mandalay Bay, said Sunday that his hotels have undertaken special security measures in recent years to identify potentially dangerous guests. Those measures include using magnetometers to detect significant amounts of metal and training housekeeping staff to report suspicious actions like a do-not-disturb sign remaining on a door for extended periods.

"If a room goes on 'do not disturb' for more than 12 hours, we investigate," Wynn, whose hotels include Wynn Las Vegas and Encore, told "Fox News Sunday" in an interview. "We don't allow guns in this building unless they're being carried by our employees, and there's a lot of them. But if anybody's got a gun and we find them continually, we eject them from the hotel."

Wynn said a scenario like Paddock's "would have triggered a whole bunch of alarms here. And we would have, on behalf of the guests, of course, investigated for safety, and it would have been a provocative situation."

Wynn said that under a counterterrorism plan put in place in 2015, "We profile or inspect or examine everybody that enters the building."