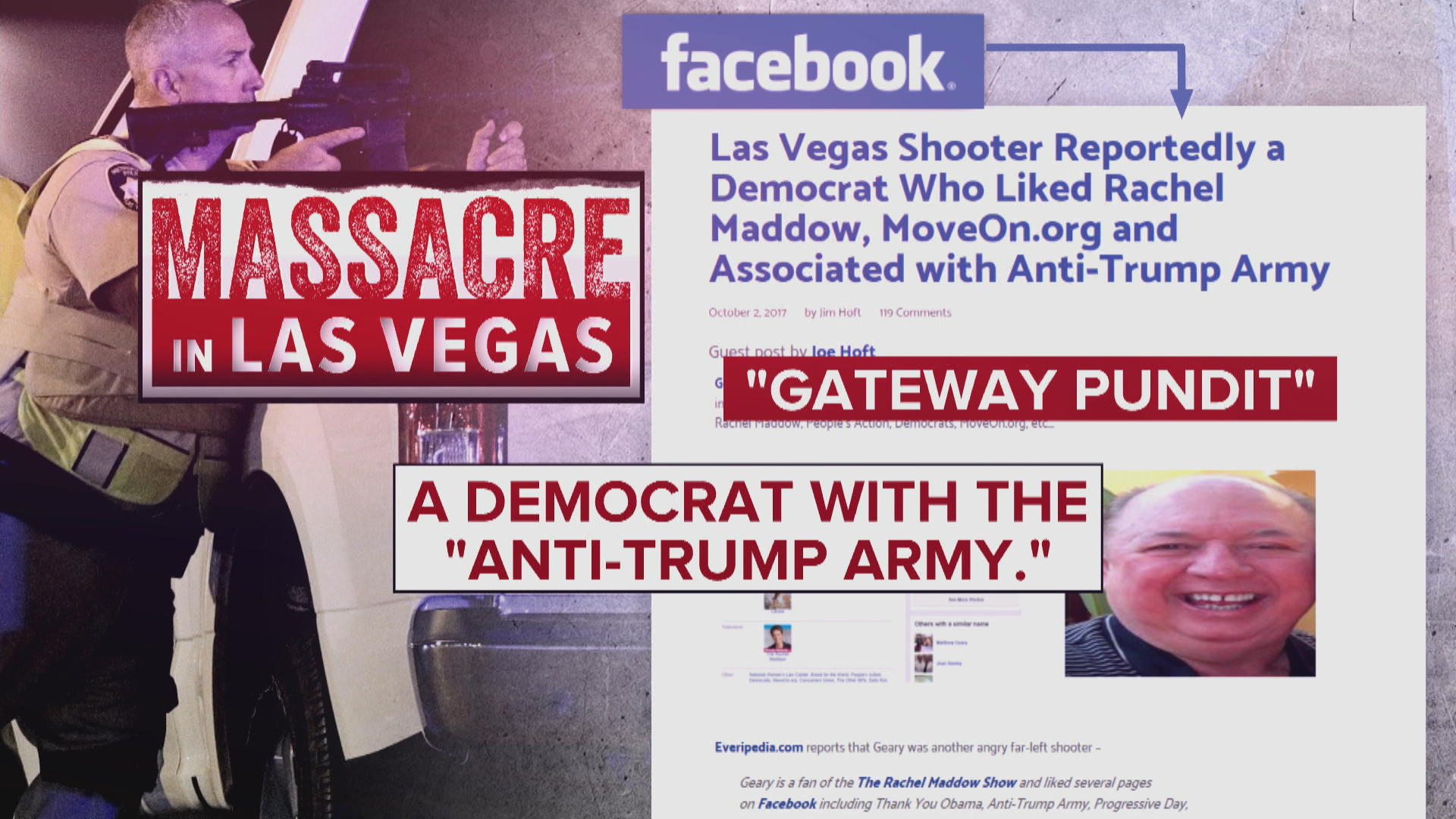 Social media has seen a shift from personal pictures and status updates to one of the main ways people get their news. However, platforms like Facebook and Google have struggled to keep a lid on incorrect information and, as seen in the last 48 hours, false news can take a real personal toll.

Fake news stories spread on social media in the hours after the mass shooting in Las Vegas as people looking for information read and shared bogus reports and hoaxes without even realizing it.

Geary Danley and his family in Arkansas found themselves in the center of the social media storm, CBS News correspondent Jim Axelrod reports.

"The Danleys have been getting death threats and would like people to know that social media has spun this out of control," said Geary Danley's daughter, Dionne Waltrip.

Geary's daughters say their father had nothing to do with the shooting. His ex-wife, Marilou Danley, is considered a person of interest because she'd been living with gunman Stephen Paddock. Amateur internet sleuths connected her name with Geary Danley's and jumped to conclusions.

Within hours of the attack, Geary Danley's name – and his photo – were spread across the internet.

Some Facebook users saw the Las Vegas crisis response page with a link to an article on The Gateway Pundit, a right-wing political website, incorrectly identifying Geary as the shooter and calling him a "Democrat with the anti-Trump army."

Another link, from the site Alt-Right News, speculated the attack was the work of ISIS. They later apologized for the mistake.

In a statement to CBS News, Facebook said the Vegas false news issue has been fixed and it's focused on a long-term solution: "We know people want to see accurate information on Facebook — and so do we. ... At Facebook, we're working to fight the spread of false news."

"People are looking for answers during crisis and news events," said Jonathan Albright, research director of the Tow Center for Digital Journalism at Columbia University, who has been tracking fake news since the run-up to the 2016 election.

He says the nature of social media amplifies stories that are blatantly false.

"The authors or the promoters of this type of fake content often are seeking to shock people, to outrage them. So even if people stop to investigate or dispute, or even debunk, or especially things like fact-check, you're just getting kind of more engagement with that, which in turn tends to reinforce the content elsewhere," Albright said.

"I wish I could tell you that we're going to be able to stop all interference, but that just wouldn't be realistic," Zuckerberg said.

In a Facebook post over the weekend, he wrote: "For the ways my work was used to divide people rather than bring us together, I ask forgiveness and I will work to do better."

On Monday, Facebook handed over to Congress 3,000 ads that were purchased as part of a Russia-linked influence operation. Congress is investigating whether those ads – seen by about 10 million people – had an impact on the 2016 election.

Facebook, Twitter, and Google are expected to testify on the Hill next month. Schiff told CBS News he wants the dubious Facebook ads to become public as soon as possible. He notes that social media companies have a long way to go in patrolling false news stories.