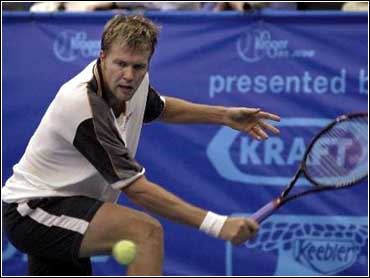 A sore knee nearly caused Magnus Larsson to withdraw from the St. Jude tournament before his first match. He is very happy that he decided to play through his pain.

"I told my coach in San Jose after I lost that I was having some pain and said, `Let's go home,' " Larsson said after hurting a tendon in his left knee last week at the Sybase Open.

Larsson never had played in this tournament and was entered as the 16th seed. But he liked a draw that gave him a first-round bye and unseeded Tomas Zib in the second. Then he got the biggest break of the week Thursday when top-seeded Mark Philippoussis withdrew before their match with an inflamed knee, giving Larsson more rest.

"I told myself to go in and fight and see what happens," he said. "If I lose, I lose. I get to rest the knee. I came out, played relaxed and didn't expect anything from myself. I think that was the key."

Larsson needed the rest to survive two three-set matches in reaching his first final in the United States.

On Sunday, it looked like Larsson wouldn't be pushed to three sets as he broke Black, the 13th seed from Zimbabwe, in the fifth game without Black scoring a point. He broke Black again for a 5-2 lead and served out.

But Black, beaten 6-2, 6-3, 7-6 (4) by Andre Agassi as the United States rallied to beat Zimbabwe in the Davis Cup earlier this month, rallied in the second set. Larsson didn't score a point off his serve as Black broke him for a 2-0 lead and eventually won the set in 23 minutes.

Black broke Larsson again for a 2-1 lead in the third set only to lose his serve in the next game. He held game point when Larsson forced deuce with a forehand passing shot, Black doublefaulted to give Larsson the advantage, and the Swede put a forehand down the line to tie the set.

With Larsson taping his leg tightly just below his knee, Black said he didn't expect the Swede to be as mobile as he was.

"He's a very awkward player to play against," Black said. "He's got some funky shots: a big forehand, the drops, a lot of shots not too many players do that nowadays. That's how he wins. He tries to get the other player out of his rhythm."

Larsson, who had a tournamenthigh 35 aces coming into the final, served up 16 more to win his seventh career title.