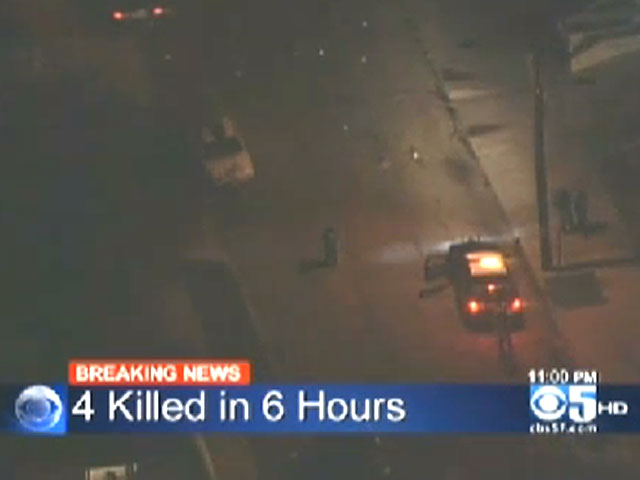 (CBS/AP) OAKLAND, Calif. - Following a string of four fatal shootings in Oakland on Friday, the city's vice mayor called for a state of emergency and authorities searched for solutions to the ongoing violence.

According to the Oakland Tribune, Vice Mayor Larry Reid wants a state of emergency declared in Oakland. The move would free up funds from the state. "We've lost control," Reid reportedly said.

Friday's victims included a 17-year-old high school senior who died at the scene of the attack at around 8:15 p.m. Oakland police spokeswoman Johnna Watson blamed groups "involved in ongoing feuds" for the shootings, which took place in different parts of the city within six hours.

The first fatal shooting involved a 22-year-old Oakland man and took place at around 2:30 p.m., The Oakland Tribune reported.

The second shooting was reported at around 3 p.m. when a 30-year-old Stockton man's body was found. It's believed the man - identified as Larry Lovette - was shot elsewhere in the city and his body taken to the Glenview district, police said.

Then at around 4:15 p.m., a 20-year-old Oakland man was found shot in his car in the driveway of a home. Eddiebo Rodriguez died after he was taken to a hospital, police said.

The 17-year-old - identified by authorities as Ken Harbin - died in an area that's plagued by gangs and gun violence. Neighbors said they heard dozens of gunshots Friday night.

Two other people were killed earlier this week in separate shootings in the city.

"We know the greater Oakland community is looking for fast action and we are putting every resource we can into making that happen," Maher said.

The police department has 612 officers, down from more than 800 in 2009 and far short of the 925 recommended by the city's strategic plan, Councilwoman Libby Schaaf said.

Proposals for creating a new police academy, contracting for supplemental policing from the county sheriff and enlarging the ranks of civilian Police Department employees could all come before the council this month, she said.

"Basic public safety resources are not in place," she said. "I know we can responsibly afford new investments in public safety."

Violent crime in Oakland rose 23 percent in 2012, prompting the city to announce last month the hiring of former New York City police commissioner and Los Angeles police chief Bill Bratton as a consultant on how to reduce crime and combat gang violence.

Bratton will be joined by noted police strategist Bob Wasserman, head of the Boston-based Strategic Policy Partnership, who has consulted many of the nation's biggest cities on policing.