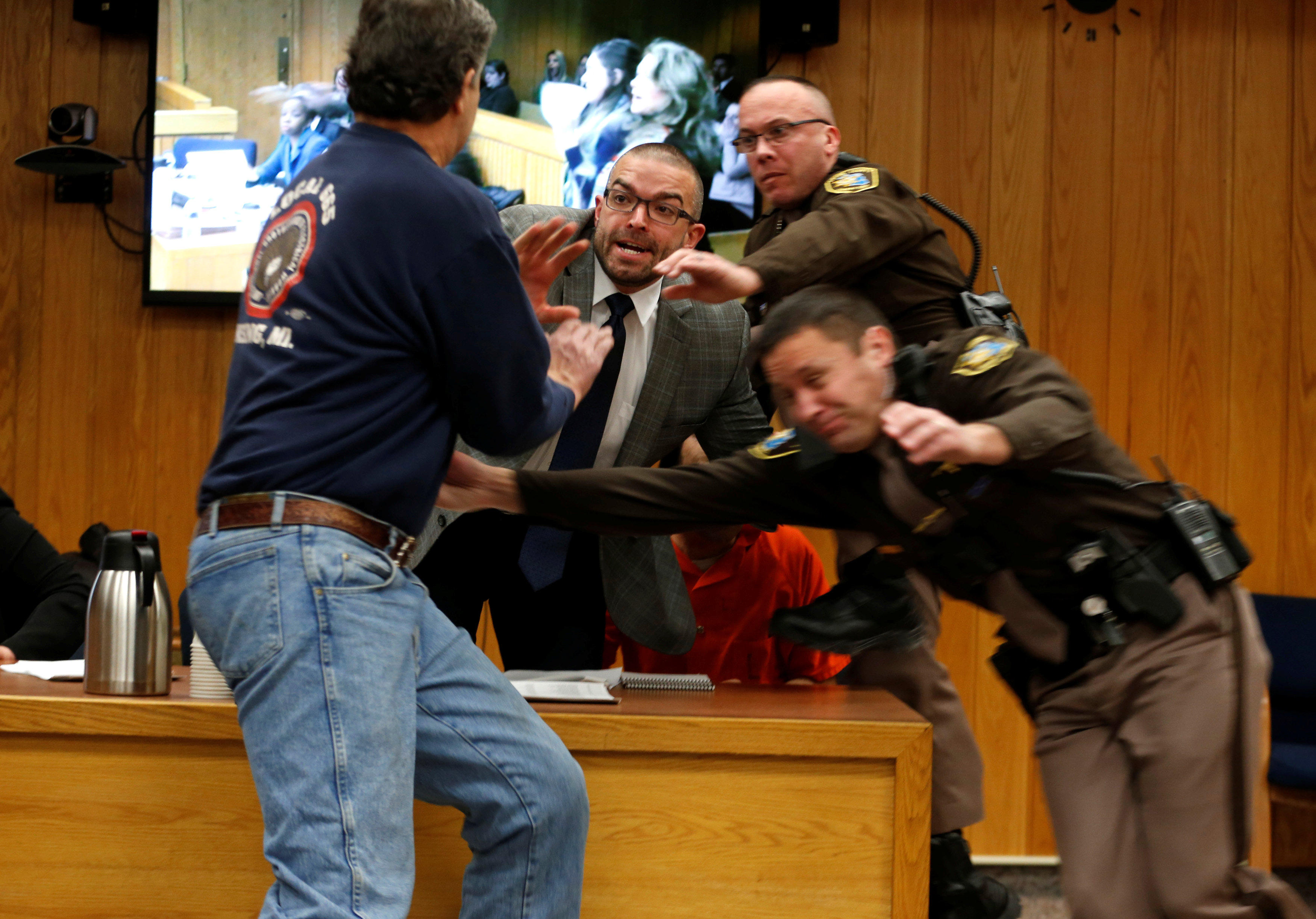 CHARLOTTE, Mich. -- A father of three victims tried to attack Larry Nassar in a Michigan courtroom on Friday after a judge declined his request for a few minutes alone in a locked room with the "demon" former sports doctor. He was blocked by an attorney and tackled by sheriff's deputies.

Two of the man's daughters had just told Judge Janice Cunningham that they and another sister had been sexually abused by Nassar under the guise of medical treatment. Their father, Randall Margraves, told the judge he was a "distraught father."

Margraves then looked at Nassar, shook his head and called him a "son of a b----" while speaking at the courtroom podium. The judge cautioned Margraves against using profanity. Margraves then made a request to the judge.

"I would ask you to, as part of this sentencing, to grant me five minutes in a locked room with this demon," Margraves said to Cunningham. "Would you do that? Yes or no."

"Would you give me one minute?" Margraves asked.

"You know that I can't do that," Cunningham said. "That's not how our legal system--."

Margraves then lunged at Nassar, who was sitting nearby.

Margraves was restrained by sheriff's deputies and hauled out of court. He returned a few hours later to apologize to Cunningham and the officers who restrained him. He said he "lost control" and was embarrassed by his actions.

"I'm not here to upstage my daughters," he said. "I'm here to help them heal."

The judge said there was "no way" she would punish him under her contempt of court powers. She noted the anguish felt by families over Nassar's crimes.

"I don't know what it would be like to stand there as a father and know that three of your girls were injured physically and emotionally by somebody sitting in a courtroom. I can't imagine that," the judge said.

Nonetheless, she added, it's "not acceptable that we combat assault with assault."

"I cannot tolerate or condone vigilantism or any other type of action that basically comes down to an eye for an eye, a tooth for a tooth," Cunningham said.

The incident occurred during the third and final sentencing hearing for Nassar on assault charges. The charges focus on his work with Twistars, an elite Michigan gymnastics club. The judge resumed the hearing after about 25 minutes.

Assistant Attorney General Angela Povilaitis told families in the courtroom to "use your words," not violence.

Moments before Margraves' stunning courtroom charge, one of his daughters, Lauren Margraves, had told the judge that her parents were "filled with regret" because they took the girls to see Nassar.

"I see the look in their faces and I know they want to be able to do something but they can't," she told Nassar. "The guilt they have will never go away. All this is because of you."

More than 30 victims have given statements so far during the hearing, which began Wednesday and is expected to stretch into next week.

During a similar hearing that ended last week, more than 150 girls and women came forward to say Nassar abused them under the guise of medical treatment while he worked with Michigan State University and USA Gymnastics. He was sentenced to up to 175 years in prison in that case. He had already been sentenced to 60 years in prison on child pornography charges.

Earlier Friday, the judge reopened the hearing by saying controversial comments made by one of Nassar's attorneys were "unfortunate." The lawyer, Shannon Smith, told CBS radio station WWJ that she had doubts about the large number of women and girls who say they are victims.

Cunningham said Nassar didn't authorize the statements and has disavowed them.

"What is relevant is for the court to hear each individual story and how the criminal actions of the defendant impacted each individual's life," Cunningham said.