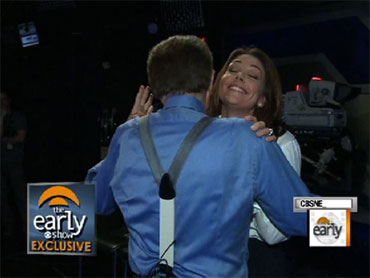 Larry King Likely to Team Up with Ryan Seacrest

The pair, talking about his next steps following the end of his show "Larry King Live," stumbled on the song when King said the news business is "not a normal business":

Hill remarked, "But you're normal."

King answered, "Do you think you're normal?"

Taking the interviewer stance, King asked, "Inside how crazy are you?"

"Probably about as crazy as everybody else," Hill said.

King said, "Do you think things that you think no one else thinks?"

"Like how your tie is reminding me of your old set background," Hill said.

"That's what's going on!" King said. "I was thinking most people are enchanted by blue eyes. You have beautiful brown eyes."

Then he launched into song. Click on the video below for his impromptu performance of the song, "Beautiful Brown Eyes":

Hill was an anchor at CNN before moving to CBS.