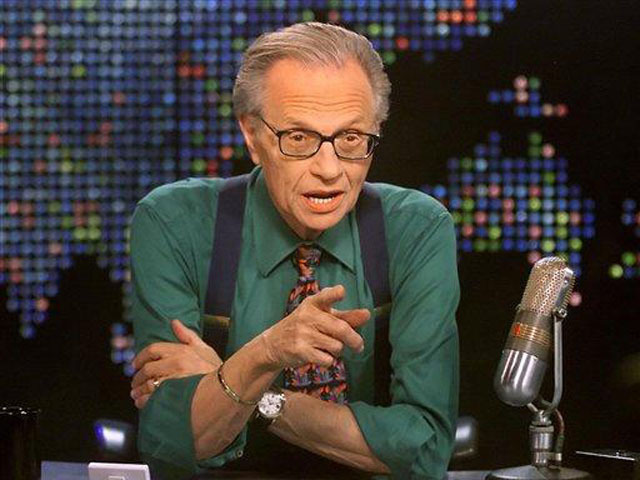 Larry King closed out his 25-year career at CNN with a farewell show Thursday night. The final edition of "Larry King Live" aired with a star-studded finale. In a "bunch of surprises," King was joined by some of his favorite guests from over the years.

Couric shared a poem on the air.

Among the many references to the big names King has had on the air in the past 25 years, it read in part:

Eight presidents joined you from Nixon to Obama,
And you brought us each moment of OJ's long drama.
Some startling shows I'll never forget;
Tammy Faye's eyes, Ted Haggard's regret.
Your guests made us cry, made us laugh, made us think,
Wynona Judd told you about a "God wink."
I hadn't heard that before so I looked the phrase up;
It's a miracle, blessing, an overfilled cup.
That's what you are, and as old Blue Eyes might say,
The best is yet to come, Larry, you did it your way.


King wiped away tears as Couric finished. It looked as though Couric was a little choked up, too.

As King's wife and their two kids joined him at the end of the show, Bill Maher surprised King by introducing Tony Bennett, who performed live via satellite from Louisiana.

King had the final word, saying in close-up, "I don't know what to say, except to you, my audience, thank you. And instead of goodbye, how about: So long."

The control room cut to a wide shot as the lights dimmed. The only light in the studio shined on King's microphone as the camera zoomed in on it. Then the show faded to black.

In June, right after CNN celebrated his 25th anniversary, King, 77, announced his retirement from his show, a week night fixture at 9 p.m. Eastern since June 1, 1985. He told viewers, "It's time to hang up my nightly suspenders."

Once the leader in cable TV news, he now ranks third in his time slot behind Fox News Channel's Sean Hannity and MSNBC's Rachel Maddow. His show was seen by 700,000 viewers this year, less than half the nightly audience of his peak year, 1998, when "Larry King Live" drew 1.64 million viewers. As recently as 2003, he was averaging 1.54 million.

In January, Piers Morgan, a 45-year-old British journalist and TV personality known mainly in the U.S. as a judge on NBC's "America's Got Talent," will be taking over King's prime-time slot with his show, "Piers Morgan Tonight."