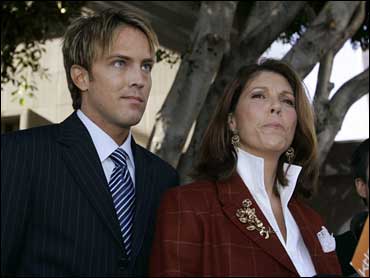 Larry Birkhead's former attorney filed a lawsuit against him Tuesday, claiming he didn't pay his legal bills during a paternity dispute involving his and Anna Nicole Smith's baby.

Debra Opri wants to force binding arbitration under the terms of a contract in which she agreed to represent Birkhead in September, according to the lawsuit filed in Superior Court.

Opri said her work on Birkhead's behalf was "extensive, entailed hundreds of hours of work" and required her to travel to multiple states and outside the country. The lawsuit did not specify a dollar amount.

Birkhead sued Smith in October seeking a paternity test of her daughter, Dannielynn Hope, to determine who was the baby's father.

Howard Stern, Smith's attorney and longtime companion, had also claimed to be the father and was listed on the baby's birth certificate.

A Los Angeles judge ruled in Birkhead's favor in December but the DNA testing was not performed until months later. Smith died in Florida on Feb. 8 of an accidental overdose of prescription drugs.

Opri was Birkhead's attorney during most of the dispute but later withdrew from the case without explaining why.