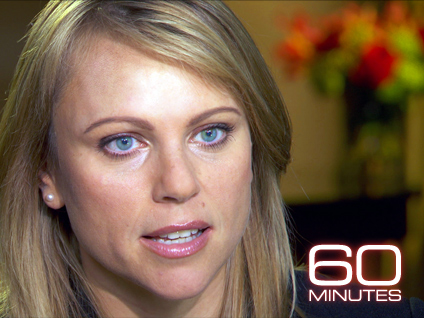 The night of Feb. 11, the Egyptian dictatorship of Hosni Mubarak was falling. More than 100,000 people filled Cairo's Tahrir Square in wild celebration. Among those in the crowd was our "60 Minutes" colleague, correspondent Lara Logan.

Lara, a native of South Africa, is an experienced war reporter, but Tahrir Square became her most hazardous assignment.

After the assault: Lara Logan comes home
The "60 Minutes" correspondent on her life since the attack, new fears as a reporter, and the people who helped restore her dignity.

During the revolution, dozens of reporters were assaulted, often by agents of the regime. On the night of the 11th, a mob turned on Lara and her "60 Minutes" team and singled her out in a violent sexual assault. Since then, Lara has been recuperating with her husband and two children.

Now, she is returning to work and she has decided to tell the story of what happened - just once - on "60 Minutes."

She's speaking out, she tells us, to add her voice to those who confront sexual violence; to break what she calls the "code of silence."

Lara arrived in Cairo at a moment of triumph for Egypt. She didn't imagine, in the hours before midnight, she would be fighting for her life.

Lara Logan: When we drove from the airport into Cairo that night, moments after Mubarak had stepped down, it was unbelievable. It was like unleashing a champagne cork on Egypt.

Logan: I'm anxious to get to the square. I've got to be there because this is a moment in history that you don't want to miss.

Logan: It's a roar of sound because everyone is so excited and they are singing songs of the revolution and shouting slogans.

Logan: And everybody is, you know, very physical, so you are being jostled and pushed. And sometimes people get closer. And my guys are very protective of me, you know, they want to keep people at bay. It was impossible not to get caught up in the moment, which was real moment of celebration.

Pelley: Tell me about your team.

Logan: Our producer was Max McClellan. My cameraman was Richard Butler.

Logan: We had a local fixer Bahaa, whose job was to bridge the divide for us as foreigners.

Logan: We had two Egyptian drivers with us who were purely there to act as security and bodyguards. And then we had a security person, Ray, who's done security all over the world.

She reported, without a hint of trouble, for more than an hour.

Pelley: And what happened then?

Logan: Our camera battery went down. And we had to stop for a moment. And suddenly Bahaa looks at me and says, "We've gotta get out of here."

Pelley: He's Egyptian. He speaks Arabic. And he can hear what the crowd is saying?

As she was pulled into the frenzy, the camera recorded Lara's shout: "Stop!"

Someone in the crowd shouted that she was an Israeli, a Jew. Neither is true. But, to the mob, it was a match to gasoline. The savage assault turned into a murderous fury.

Logan: I have one arm on Ray. I've lost the fixer, I've lost the drivers. I've lost everybody except him. And I feel them tearing at my clothing. I think my shirt, my sweater was torn off completely. My shirt was around my neck. I felt the moment that my bra tore. They tore the metal clips of my bra. They tore those open. And I felt that because the air, I felt the air on my chest, on my skin. And I felt them tear out, they literally just tore my pants to shreds. And then I felt my underwear go. And I remember looking up, when my clothes gave way, I remember looking up and seeing them taking pictures with their cell phones, the flashes of their cell phone cameras.

Pelley: Ray reported that he found himself with the sleeve of your jacket in his hand. It had been completely ripped from the rest of the jacket.

Logan: I felt at that moment that Ray was my only hope of survival. You know, he was looking at me and I could see his face and we had a sea of people between us, obviously tearing at both of us, beating us. I didn't even know that they were beating me with flagpoles and sticks and things, because I couldn't even feel that. Because I think of the sexual assault, was all I could feel, was their hands raping me over and over and over again.

Pelley: Raping you with their hands?

Pelley: Nonstop. During this whole time?

Logan: From the front, from the back. And I didn't know if I could hold onto Ray. I'm holding on to him. I didn't wanna let go of him. I thought I was gonna die if I lost hold of him.

But in that moment Ray, a former special forces soldier, was torn away.

Logan: When I lost Ray, I thought that was the end. It was like all the adrenaline left my body. 'Cause I knew in his face when he lost me, he thought I was gonna die. They were tearing my body in every direction at this point, tearing my muscles. And they were trying to tear off chunks of my scalp, they had my head in different directions.

Pelley: Pulling at your hair?

Logan: Oh yeah, not trying to pull out my hair, holding big wads of it, literally trying to tear my scalp off my skull. And I thought, when I thought I am going to die here, my next thought was I can't believe I just let them kill me, that that was as much fight as I had. That I just gave in and I gave up on my children so easily, how could you do that?

Pelley: Your daughter and your son are one and two years old?

Logan: I had to fight for them. And that's when I said, "Okay, it's about staying alive now. I have to just surrender to the sexual assault. What more can they do now? They're inside you everywhere." So the only thing to fight for, left to fight for, was my life.

It was a fight she endured about 25 minutes.

Logan: I was no doubt in my mind that I was in the process of dying. I thought, not only am I gonna die here, but it's gonna be just a torturous death that's going to go on forever and ever and ever.

Lara was dragged along by the mob until they were stopped by a fence. At that spot, a group of Egyptian women were camped out.

Logan: Yes. And she put her arms around me. And oh my God, I can't tell you what that moment was like for me. I wasn't safe yet, because the mob was still trying to get at me. But now it wasn't just about me anymore. It was about their women and that was what saved me, I think. The women kind of closed ranks around me. And I remember one or two, maybe three men standing with them and throwing, the women were throwing water in the crowd. And they were pouring water over me, 'cause I couldn't breathe. You know I was I was rasping.

By this time her team had convinced a group of soldiers to go in after her.

Logan: Finally, finally some soldiers fought their way through the crowd with batons, beating the mob back, and that was the moment I thought, "I have a chance to get out of here alive." And I grabbed the first soldier and I did not let him go. I did, boy, I was not letting go of him. And I am screaming and hysterical, I'm like a wild thing at this point. Imagine my hair is everywhere because they tried to tear my scalp to pieces, my clothes are shredded, I am filthy, black with dirt from going down into the filth.

Pelley: The soldiers took you out of there?

Logan: That one soldier that I was holding onto, he threw me over his back and they still had to beat the mob back to get through it, back to the tank, where they had more soldiers.

Pelley: What happened in that moment when you first were reunited with the rest of the crew?

By the time producer Max McClellan saw Lara, she was in the arms of one of the drivers, dangling as if her legs were broken.

The soldiers drove Lara and her "60 Minutes" team back to their hotel, where a doctor examined her.

McClellan: She was basically sore everywhere. Head to toe. It was like she had been through some sort of grinder.

The next morning, Max and Lara flew back to the U.S.

Pelley: When you landed in Washington, you didn't go home. You went straight to the hospital.

Logan: And I stayed there for four days, which was hard. My muscles were so unbelievably sore, because they were literally stretched from the mob trying to tear my limbs off my body. My joints, every joint in my body was distended. And then they, the more intimate injuries, the injuries, the tearing inside. And the mark of their hands, their fingers all over my body, cuts and everything you could imagine. But no broken bones.

Pelley: Tell me about that moment when you saw your children again.

Logan: I felt like I had been given a second chance that I didn't deserve. Because I did that to them...I came so close to leaving them, to abandoning them.

That night, her attackers faded away in the crowd. It's not likely anyone involved will be brought to justice. We may never know with certainty whether the regime was targeting a reporter or whether it was simply - and savagely - a criminal mob. It is true, in Egypt in particular, that sexual harassment and violence are common.

Logan: I had no idea how endemic that it is so rife, so widespread, that so many Egyptian men admit to sexual harassing women and think it's completely acceptable. In fact, blame the women for it.

Pelley: Why are you telling this story now?

Logan: One thing that I am extremely proud of that I didn't intend is when my female colleagues stood up and said that I'd broken the silence on what all of us have experienced but never talk about.

Pelley: What did they mean by that?

Logan: That women never complain about incidents of sexual violence because you don't want someone to say, "Well women shouldn't be out there." But I think there are a lot of women who experience these kinds of things as journalists and they don't want it to stop their job because they do it for the same reasons as me - they are committed to what they do. They are not adrenaline junkies you know, they're not glory hounds, they do it because they believe in being journalists.

The breadbasket of the world

The house that unlocked a family's history
Thanks for reading CBS NEWS.
Create your free account or log in
for more features.
View CBS News In
CBS News App Open
Chrome Safari Continue
Be the first to know
Get browser notifications for breaking news, live events, and exclusive reporting.