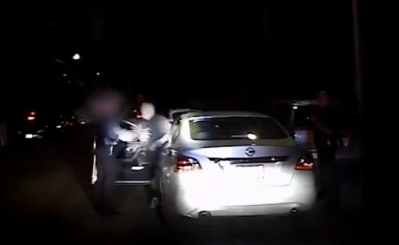 NORTH HILLS, Calif. -- The Los Angeles Police Department released video Monday of an officer-involved shooting that left the suspect dead and one officer wounded in the leg. The shooting happened during a traffic stop in North Hills, California, on the night of July 27, CBS Los Angeles reports.

The video shows the officer speaking to the suspect, 32-year-old Richard Mendoza. Mendoza appears to be following the unidentified female officer's directions when she tells him to step out of the car.

Video then shows him pulling out a gun and shooting her in the leg. He then turned to shoot at her partner over the car.

Mendoza was shot in the head and the torso. He died at a hospital.

According to police, Mendoza was a gang member and had previous convictions on drug and gun charges.

The officer was treated for a gunshot wound to the leg.

The shooting remains under investigation, according to the LAPD.