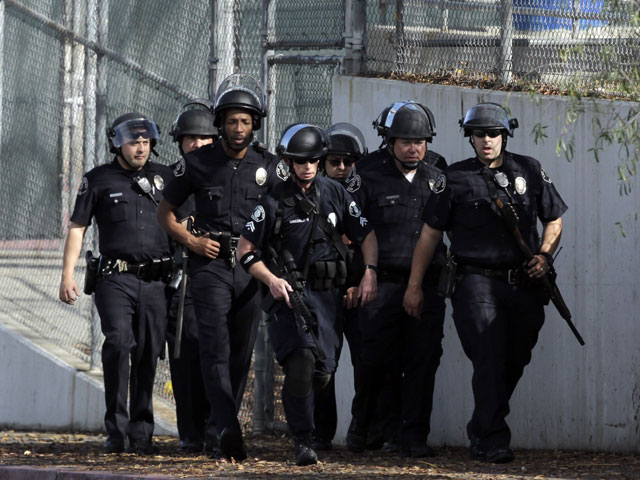 (CBS/AP) Los Angeles school police officer Jeffrey Stenroos will be fired for an alleged shooting hoax that sparked one of the largest local manhunts in recent memory and forced thousands of students to remain in their classrooms for hours, the head of the city's Unified School District declared Friday.

Law enforcement officials say Stenroos was lying when he claimed a gunman shot him in the chest as he patrolled near a San Fernando Valley high school Jan. 19. He was arrested Thursday night on suspicion of filing a false police report and was released on $20,000 bond shortly before midnight.

"The current state of the investigation refutes Stenroos' initial account of the incident and we are now certain that there is no outstanding suspect in this shooting," Police Chief Charlie Beck said at a news conference Thursday night.

Stenroos was mishandling a firearm when he was shot, according to a law enforcement official, who asked not to be identified.

The gunshot hit Stenroos' bulletproof vest and authorities said that protection saved his life. He was treated for minor injuries and released from the hospital later that night.

The day of the shooting, nine schools with about 9,000 students were placed on lock down as more than 350 officers, sheriff's deputies and California Highway Patrol officers scanned 7 square miles of the affluent Woodland Hills neighborhood near El Camino Real High School in search of the alleged gunman described as a man in his 40s with long brown hair.

Students were held in their classrooms for hours, restricted from access to food or bathrooms, prompting anger and frustration from parents.

Los Angeles Police Protective League president Paul Weber said he was "disgusted" to hear about Stenroos' arrest and apologized to the public for his actions.

"His lies set into motion the largest search for a suspect in recent history and inconvenienced thousands of people for hours," the union president said. "If these allegations are proven true, Mr. Stenroos is now where he belongs, behind bars."