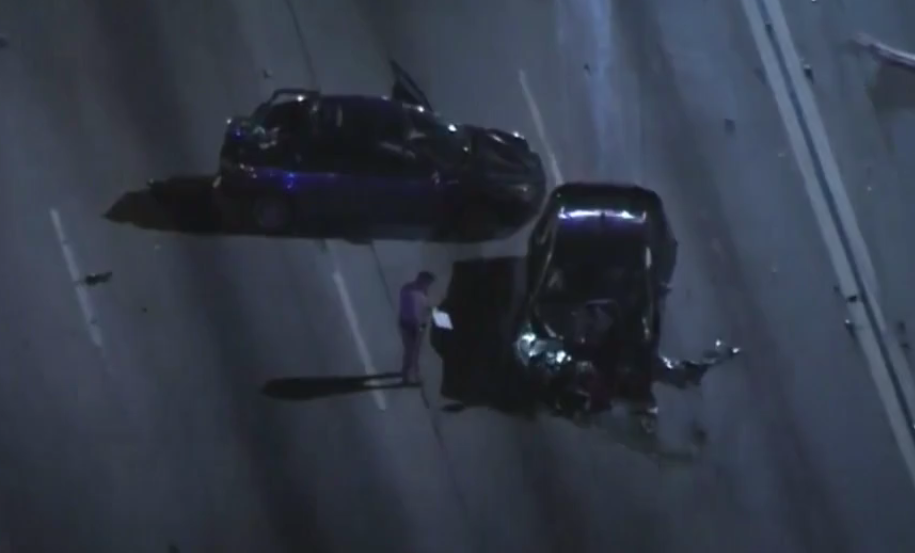 WHITTIER, Calif. -- An off-duty Los Angeles police officer was arrested on suspicion of driving under the influence after a fiery freeway crash that killed a family of three, police said.

The officer, Edgar Verduzco, was driving at a "high rate of speed" along Interstate 605 in Whittier Tuesday night when his vehicle slammed into the back of two cars, the California Highway Patrol said.

One of the cars burst into flames, killing a mother, father and their teenage son, Sgt. Saul Gomez said. Two people in the third car were injured.

The victims were identified as Mario, Maribel and Oscar Davila, CBS Los Angeles reports. A GoFundMe page has raised more than $4,300 for the family.

Los Angeles Police Chief Charlie Beck said Verduzco was an Army veteran who joined the force about two years ago. The officer has been placed on leave as the LAPD conducts an internal investigation, Beck said.

"I cannot tell you how angry and disappointed I am that a Los Angeles police officer would disregard the law and cause an accident with such awful, awful consequences," Beck said Wednesday. "My heart goes out to the victims and their families."

The officer's union said in a statement that if Verduzco is convicted, he "should suffer the consequences of his reckless actions."

Verduzco was booked on suspicion of driving under the influence of alcohol and/or drugs causing bodily injury and is being held on $100,000 bail. He was taken to a hospital with major injuries, including a broken nose.