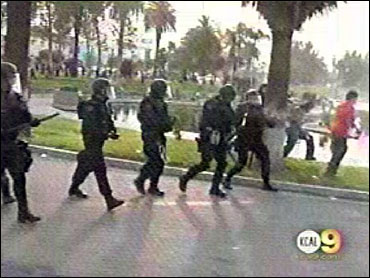 Three investigations have been launched into police officers' tactics in dispersing a crowd at an immigration rally, where authorities wielded batons and fired rubber bullets into crowds.

"This incident is one of the more disturbing and troubling in my 37-year career," Police Chief William J. Bratton said Thursday on CBS News' The Early Show.

Bratton did not try to defend the actions of his officers, reports CBS News correspondent Steve Futterman. Instead he promised a complete and very public examination of Tuesday night's events.

News images showed police hitting a KCBS/KCAL television cameraman to the ground, shoving people who were walking away from officers and injuries from the rubber bullets.

"All I thought they would do was line up and march and say 'get out of here,'" said KCBS reporter Mark Coogan, one of those beaten. "You didn't have to whack people or fire at people with rubber bullets."

"They were pushing children, elderly, mothers with their babies and beating up on the media" said Angela Sanbrano, an organizer.

"I'm not seeking to defend it all. That's why we're having investigations. I've already indicated I don't like what I see on the videos," Bratton told Early Show co-anchor Julie Chen.

The clashes started around 6 p.m. Tuesday, when police tried to disperse demonstrators who moved into a street, according to rally organizers and reporters. Authorities said several people threw rocks and bottles at officers, who used batons to push the crowd back to the sidewalk and then cleared the park.

A police order to disperse was in English and from a police helicopter, a likely ineffective tactic because of the noise and because many at the protest were Spanish-speakers, Bratton said.

Police union leaders urged against a "rush to judgment."

"Our officers gave a legal dispersal order and were met with violence. In the coming days it will become clear what transpired," said Los Angeles Police Protective League President Bob Baker in a statement.

Seven officers suffered minor injuries, and another was pushed off his motorcycle, Bratton said. About 10 other people were treated for minor injuries, though authorities expected the number to rise.

The investigations already under way include an overall departmental review of tactics, an internal affairs investigation into the behavior of the officers and commanders on the scene, and an independent review by the Inspector General, the investigative arm of the Police Commission, which sets policy for the Police Department.

John Mack, president of the five-member Police Commission, said he was "deeply disturbed and very disappointed" by the news images.

"This was not a pretty picture. This incident raises serious concern regarding the use of force by some individual officers," said Mack, who is one of Bratton's bosses.

He said police deliberately led troublemakers back to the peaceful marchers before beginning their assault.

"The only logical conclusion I can come to is that somebody wanted it to bleed into the march so that they can do some target practice on some of the immigrants that were marching," Nunez said.

News organizations also condemned the Police Department for its use of batons and riot guns against members of the media.

"We are sorry for what happened to our employees and find it unacceptable that they would be abused in that way when they were doing their job," said Alfredo Richard, spokesman for the Spanish-language network Telemundo, whose anchor and reporter were hurt.

Bratton promised to investigate the treatment of reporters.

"We should never be engaged in attacking anyone in the media," Bratton said.