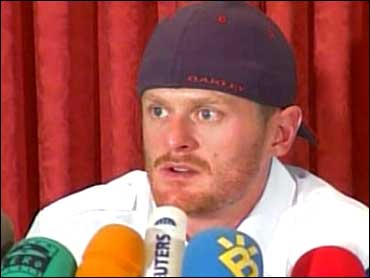 By the time he taped his makeup appearance on the "Tonight Show," Floyd Landis still had one theory left to float for his failed drug test.

Was it something he ate?

"Now there's also the possibility, and it's an argument that has been used by other people," Landis told host Jay Leno on Tuesday. "At this point, I don't know if it's somehow or some way I ingested something that caused the tests to be that way."

Leno didn't go easy on Landis, who canceled what was supposed to be a triumphant post-Tour de France appearance late last month because he was still in Europe following the news that he had tested positive for a high testosterone ratio during the race.

"I see you on these shows," Leno said, "and I do want to believe you and evidence seems — I don't know if it's overwhelming, but it seems pretty conclusive, right?"

Landis said yes, if one goes by the tests, and Leno shot back, "Why should we not go by the tests? Tell me why."

Landis responded that there were several possibilities, saying, "The tests and the people doing the tests would like you to believe that the only possibility is that I essentially took some drugs and that's why the test is that way."

That's when Landis wondered out loud if he took something without realizing it.

Landis also repeated some of the possibilities suggested in the days since the test was made public. He and his defense team have floated anything from cortisone shots taken for pain in his degenerating hip; drinking beer and whiskey the night before; thyroid medication; his natural metabolism; and dehydration.

At one point, Landis also insisted that his body naturally caused the positive tests. On Tuesday, he also called into question the integrity of the testing monitors.

"And I'm beginning to wonder about this myself after the way the situation's been handled, is that after the (sample) leaves my hands ... after I give them the sample, I don't know where it goes."

There wasn't much joking while Landis was on the show, although Leno had said in his monologue, "Tonight we have a man on this show who has way too much testosterone — Bill Maher."

Leno also said that he rode his bike to work because Landis was going to be on the show, grinning and adding, "Oh, yeah. It was my Harley."

Landis himself got a laugh from the studio audience by defending Leno against Maher. At one point during the exchanges between Leno and Landis, Maher suggested the debate was pointless anyway, asking, "Does anyone ever watch people bicycle racing, except for the last 10 seconds?"

Landis spoke up, "He has a hard time getting guests here. Leave the guy alone."

The crowd laughed and applauded.

After falling out of first place and back into the pack at this year's Tour de France, Landis came roaring back to win stage 17 in the Alps with one of the more remarkable rides in cycling history.

Both of Landis' "A" and "B" samples taken after that stage turned up a testosterone/epitestosterone ratio of 11:1 — far in excess of the 4:1 limit. Further tests also showed that the samples contained synthetic testosterone, indicating that it was from an outside source.

Landis has maintained his innocence.

Making the round of TV shows this week, Landis has said his early reaction to the case led people to believe that he was just trying to come up with new excuses.

"That was a mistake on my part," Landis said on CBS News' The Early Show.

"I felt like I had to defend myself. My friends and my family were being harassed. So, you know, I said whatever I could say that came to mind that I thought may be a possible explanation," he said.

But Landis said he's going to fight the charges.

"Whatever it takes, whatever I have to put into this, that's what I'm going to do because there is a solution. There is an explanation for this, and I need to find out what it is," Landis told CBS News chief investigative correspondent Armen Keteyian.

Tour de France officials no longer consider him the champion, and Landis' Swiss racing team dismissed him. He likely will try to keep his champion's yellow jersey by appealing, a process that could take months.

If he eventually is stripped of the championship, he would be the first rider to lose the title in the race's 103-year history.