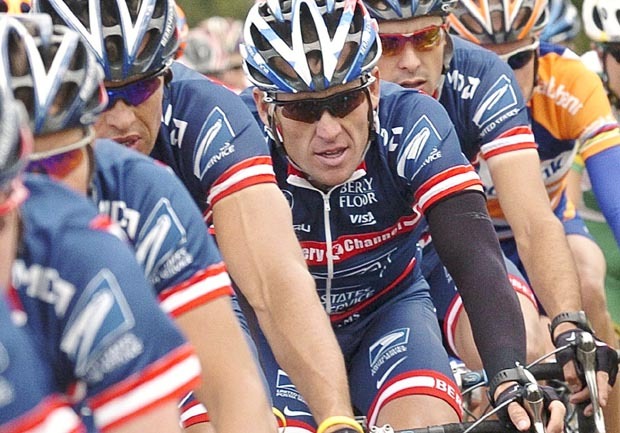 Lance Armstrong challenged the U.S. Anti-Doping Agency to name names and show what it had on him.

On Wednesday, it did.

The anti-doping group released a report on its case against Armstrong — a point-by-point roadmap of the lengths it says Armstrong went to in winning seven Tour de France titles USADA has ordered taken away.

In more than 150 pages filled with allegations, USADA names 11 former teammates — George Hincapie, Tyler Hamilton and Floyd Landis among them — as key witnesses.

It details the way those men and others say drugs were delivered and administered to Armstrong's teams. It discusses Armstrong's continuing relationship with and payments to a doctor, Michele Ferrari, years after Ferrari has been sanctioned in Italy and Armstrong claimed to have broken ties with him.

It presents as matter-of-fact reality that winning and doping went hand in hand in cycling and that Armstrong's teams were the best at getting it done without getting caught. He won the Tour as leader of the U.S. Postal Service team from 1999-2004 and again in 2005 with the Discovery Channel as the primary sponsor.

The report also uses Armstrong's own words against him.

"We had one goal and one ambition and that was to win the greatest bike race in the world and not just to win it once, but to keep winning it," the report reads, quoting from testimony Armstrong gave in an earlier legal proceeding.

But, USADA said, the path Armstrong chose to pursue his goals "ran far outside the rules." It accuses him of depending on performance-enhancing drugs to fuel his victories and "more ruthlessly, to expect and to require that his teammates" do the same.

Armstrong did not fight the USADA charges, but insists he never cheated.

Aware of the criticism his agency has faced from Armstrong and his legion of followers, USADA Chief Executive Travis Tygart insisted USADA handled this case under the same rules as any other. He pointed out that Armstrong was given the chance to take his case to arbitration and he declined, choosing in August to accept the sanctions instead.

"We focused solely on finding the truth without being influenced by celebrity or non-celebrity, threats, personal attacks or political pressure because that is what clean athletes deserve and demand," Tygart said.

Some of the newest information — never spelled out in detail before Wednesday — includes USADA's depiction of Armstrong's continuing relationship with Ferrari, who, like Armstrong, has received a lifetime ban from USADA.

Ferrari, long thought of as the mastermind of Armstrong's alleged doping plan, was investigated in Italy and Armstrong claimed he had cut ties with him after a 2004 conviction. USADA cites financial records that show payments of at least $210,000 in the two years after Ferrari's conviction.

"The repeated efforts by Armstrong and his representatives to mischaracterize and minimize Armstrong's relationship with Ferrari are indicative of the true nature of that relationship," the report states. "If there is not something to hide, there is no need to hide it and certainly no need to repeatedly lie about it."

In some ways, the USADA report simply pulls together and amplifies allegations that have followed Armstrong ever since he beat cancer and won the Tour for the first time. At various times and in different forums, Landis, Hamilton and others have said that Armstrong encouraged doping on his team and used banned substances himself.

Last year, Hamilton told "60 Minutes"that Armstrong used EPO, a drug that boosted endurance by increasing the amount of red blood cells in his body, to win the 1999 Tour de France, the race he won an astonishing seven times.

"I saw [EPO] in his refrigerator...I saw him inject it more than one time like we all did, like I did many, many times," Hamilton said.

While the arguments about Armstrong will continue among sports fans — and there is still a question of whether USADA or the International Cycling Federation has ultimate control of taking away his Tour titles — the new report puts a cap on a long round of official investigations. Armstrong was cleared of criminal charges in February after a federal grand jury probe that lasted about two years.

Tygart said the evidence shows the code of silence that dominated cycling has been shattered.

"It took tremendous courage for the riders on the USPS Team and others to come forward and speak truthfully," he said. "It is not easy to admit your mistakes and accept your punishment. But that is what these riders have done for the good of the sport."

In a letter sent to USADA attorneys Tuesday, Herman dismissed any evidence provided by Landis and Hamilton, calling them "serial perjurers and have told diametrically contradictory stories under oath."

Hincapie's role in the investigation — not definitively confirmed until Wednesday's report — could be more damaging, as he was one of Armstrong's closest and most loyal teammates through the years.

"Two years ago, I was approached by U.S. federal investigators, and more recently by USADA, and asked to tell of my personal experience in these matters," the cyclist said in a statement published shortly after USADA's release. "I would have been much more comfortable talking only about myself, but understood that I was obligated to tell the truth about everything I knew. So that is what I did."

Hincapie's two-page statement did not mention Armstrong by name.

In addition to Armstrong and Ferrari, another player in the Postal team circle, Dr. Garcia del Moral, also received a lifetime ban as part of the case.

Three other members of the USPS team will take their cases to arbitration. They are team director Johan Bruyneel, team doctor Pedro Celaya and team trainer Jose "Pepe" Marti.

Armstrong chose not to pursue the case and instead accepted the sanction, though he has persistently argued that the USADA system was rigged against him, calling the agency's effort a "witch hunt" that used special rules it doesn't follow in all its other cases.

The UCI has asked for details of the case before it decides whether to sign off on the sanctions. The federation has 21 days to appeal the case to the Court of Arbitration for Sport.

USADA has said it doesn't need UCI's approval and Armstrong's penalties already are in place.

UCI President Pat McQuaid, who is in China for the Tour of Beijing, did not respond to telephone calls from The Associated Press requesting comment.

The report also will go to the World Anti-Doping Agency, which also has the right to appeal, but so far has supported USADA's position in the Armstrong case.

ASO, the company that runs the Tour de France and could have a say in where Armstrong's titles eventually go, said it has "no particular comment to make on this subject."