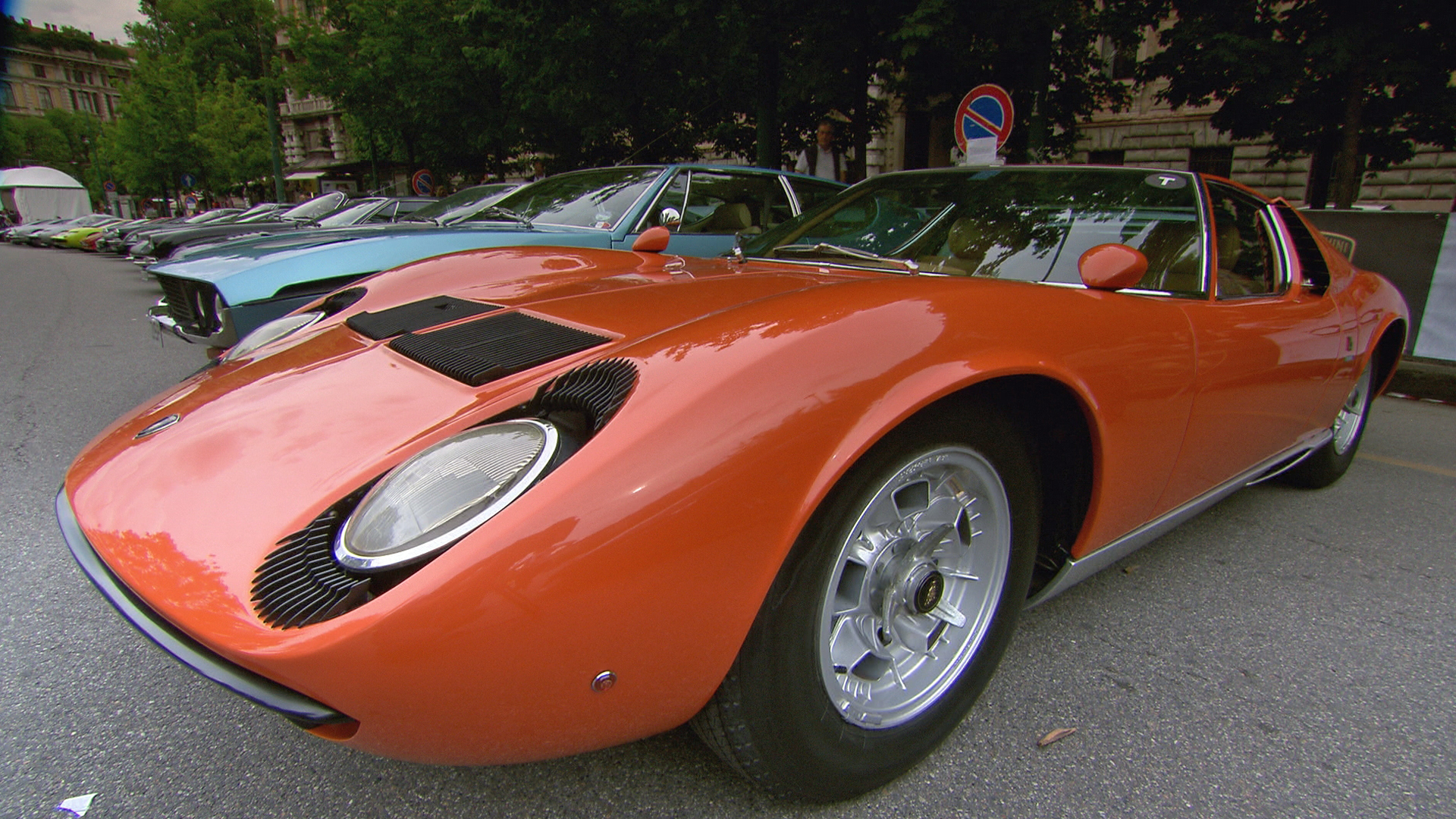 The following script is from "Lamborghini" which aired on Nov. 3, 2013. The correspondent is Scott Pelley. Nicole Young, producer.

Imagine paying six figures for a car and being told you had to stand in line a year to get it. Oh, and by the way, it has two seats, no trunk to speak of, and it gets 14 miles to the gallon. You might think a company like that wouldn't last. But Lamborghini of Italy, celebrates its 50th anniversary this year. Fifty years of creating the world's most exotic supercars. And fifty years of dodging bankruptcy. No, a car company like that wouldn't last...

...but then, Lamborghini never was a car company. It's a builder of fantasies. You don't realize how overused the word "breathtaking" is until something actually takes your breath away.

Mario Fasanetto: If you open aggressive the throttle you have 570 horsepower.

Lamborghini test driver Mario Fasanetto finds the limits in the cars. Though this time on Bologna's Imola race track, the limits belonged to the driver, not to the 200 mile-an-hour, $200,000 Lamborghini Gallardo.

Scott Pelley: I'm not making you nervous am I?

Maybe he's calm because this is the least expensive Lamborghini. There's a $400,000 car and a $4 million car, but before we see those have a look at how much road Lamborghini has put between the cars of today and it's humble beginnings.

The creator, the late Ferruccio Lamborghini, was a wealthy builder of tractors --the John Deere of Italy. Morley Safer met him in our first story on Lamborghini in 1987. Mr. Lamborghini collected Ferraris but he found the clutches weak. The story goes he complained to Enzo Ferrari who said, "stick to tractors, I'll build the cars." In Italy, insult is the mother of invention.

Lamborghini sought to teach Ferrari a lesson with lavish interiors, brawling V12 engines and style like nothing else. The namesake loved Spain's traditional sport so each model is named for famous bulls.

The latest beast to bolt into the ring is the Aventador.

[Scott Pelley: The transmission has three settings it has 'road,' 'sport' and 'race.'

Mario Fasanetto: Race, you have to set race!

Scott Pelley: I'm not sure everyone should select race on this car.]

We didn't "race" through Northern Italy because of traffic and because our jet helicopter with our camera can fly only 170 miles an hour. The Aventador will do 217. Zero to 60 in under three seconds.

[Scott Pelley: Are we still on the right road for Lamborghini?

Mario Fasanetto: Next roundabout on the left.]

We're coming into the town of Sant'Agata in what Italians call "Motor Valley."

[Scott Pelley: This is the original factory?

Mario Fasanetto: Yes, there is just one Lamborghini, the original.]

The original factory floor is thoroughly modern now. It's spotless, which seems to be a point of pride in that, even the floors are squeaky clean. But it's also an old fashioned place where hands know the feel of a bolt properly torqued and eyes judge each pane perfectly placed. Ranieri Niccoli is their industrial director.

Scott Pelley: You know what I didn't see on your assembly line that I see on every automotive assembly line--

Ranieri Niccoli: No way. Clear, no way. No, all the Lamborghini are done by people, Italian people from Sant'Agata. This is-- this is our value. No way for robots.

Ford builds about 23,000 vehicles a day. Lamborghini builds 11. Each purchased a year in advance. Each unique.

Scott Pelley: How many colors do you offer?

Ranieri Niccoli: Whatever you want.

Scott Pelley: Any color I want?

Ranieri Niccoli: Yeah, basically we try to fill out the requests of our customers.

Scott Pelley: I can walk in with my favorite tie...

Ranieri Niccoli: Or with the-- or your-- or-- or with the bag of your wife, yes.

Scott Pelley: Has any woman ever matched the car to her handbag?

Scott Pelley: The customer is king?

As we walked the plant with Niccoli, we were struck by a sharp division of labor.

Scott Pelley: Nearly everyone on this assembly line is a man. But, if you go over to where the interior is done, nearly everyone is a woman. Why is that?

Ranieri Niccoli: I can tell you this. We really need women on the-- on the interior. Because the precision that the women has, unfortunately we as men, we don't have that.

Scott Pelley: We don't have the precision?

Ranieri Niccoli: Not the precision and the manuality to really-- to create a masterpiece like our interior.

Scott Pelley: The car is male on the outside and female on the inside?

Ranieri Niccoli: Let's say it like this. Yeah, it could be.

Scott Pelley: These don't look like any other car on the road. Something that makes you smile.

The guy with the proud father look is Filippo Perini, the chief designer, in charge of the look of Lamborghini.

Scott Pelley: When we were driving the Aventador today on the road there was a truck and the passenger in the truck turned around to take a picture of the car. Why does that happen?

Filippo Perini: Because we are in Italy, people love beautiful cars.

Perini runs this shop where designers who love beautiful cars take their inspiration, we're told, from the contours of insects and fighter planes.

Filippo Perini: Yeah, yeah, it's all-- it happened always like this.

When we asked Perini for Lamborghini's DNA, he drew a single arc.

Scott Pelley: That, is a Lamborghini line.

Filippo Perini: This is a really a Lamborghini line, this is our own way to produce cars.

An uninterrupted line from front to rear.

Scott Pelley: It's very beautiful and it is completely impractical. There is no trunk.

Filippo Perini: No, we have a good trunk in front.

Scott Pelley: Uh, alright. Yeah. But if you want your golf clubs you're going to have to have another car.

Filippo Perini: I think with a car like this you won't have time to do golf.

Scott Pelley: You won't want to play golf because you'll be driving your car.

One thing that could fit in there are Lamborghini's profits.

In the $400,000 car business any recession slams on the brakes. Mr. Lamborghini and a series of owners have lost fortunes.

That began to change in 1998 Volkswagen bought the company under its Audi brand. At a race in England, Lamborghini president and CEO Stephan Winkelmann told us the company has been making money now since 2006. One of the selling points in addition to style and speed is the sound. Engineers labor over the growl. You can tell that a Lamborghini's coming before you ever see it.

In a showroom in New York, we asked Chief Operating Officer of Lamborghini America Michael Lock the most important question a buyer can ask.

Scott Pelley: What's wrong with it?

Michael Lock: What's wrong with it? I think, if I were to be critical, I would say that we need to do a very good job of managing the perception of our brand. Want to make sure that Lamborghini is seen as a friendly brand.

Scott Pelley: After the Great Recession, especially this soon after the great recession, you want to make sure your driver's not scorned.

Lock told us that even though the company is profitable thanks to German discipline the car still has to be sold the Italian way.

Michael Lock: Seduction is certainly an important part of that process. Yes.

Scott Pelley: They have to be just a little bit irrational about this purchase.

Michael Lock: They have to be a little bit romantic, certainly.

You'd have to be hopelessly romantic and maybe embarrassingly rich to join Lamborghini's 50th anniversary party last spring. Three hundred and fifty owners shipped their raging bulls from all around the world for a 10-city, five-day, sprint through Italy.

It looks like we sped these pictures up, but of course we didn't. An Italian road can really look like this when the steering is as precise as Leonardo da Vinci and the brakes have the stopping power of Sophia Loren. How do you get this past the highway patrol? Build them a Lamborghini.

Nearly every model from every era filled the piazzas to be blessed, fussed over, photographed and admired as part of the national heritage. No two alike, each crafted as a matter of taste. Even this was an offer Lamborghini couldn't refuse.

The rally ended with a coming out party for a new car named for a bull that murdered a matador.

Lamborghini built only four Venenos, one for itself and three that sold for $4 million each.

Scott Pelley: Who buys that?

Michael Lock: Very few people. And, the most difficult thing to manage in the process of selling those cars was having a palatable story for the six or seven who we couldn't get a car for.

Scott Pelley: You had to tell them why they couldn't buy a $4 million car?

Michael Lock: I had to explain that we had a very limited production available on these cars.

Scott Pelley: How many of the three Veneno buyers bought the car sight unseen?

Michael Lock: All three of them.

The golden anniversary party ended with opera and fireworks as all Italian celebrations must. With five decades in the rear view mirror, Lamborghini is still exploring the limits of the science of engineering and art of irrational romance.