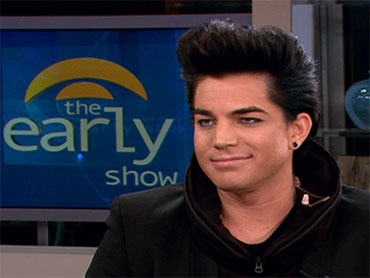 He told "Early Show" co-anchor Maggie Rodriguez Wednesday he had "no clue. No clue at all," his appearance would prove as controversial as it has. "I was really looking forward to it. I worked really hard with my dancers and my band for about two weeks putting that together. And, I admit I did get carried away, but I don't see anything wrong with it. I do see how people got offended, and that was not my intention. My intention was just to interpret the lyrics of my song and have a good time up there."

His performance on the AMAs of "For Your Entertainment" was an elaborate and had an S&M theme. He fondled a dancer, led another around on a leash, kissed a man, and had a dancer briefly stick his head in Lambert's crotch.

After it aired unedited on the East Coast, right-wing groups such as the Liberty Counsel filed formal complaints with the Federal Communications Commission, demanding ABC be held responsible for airing the overtly sexual performance during primetime.

Lambert's AMA Act Has People Talking
Was Lambert's AMA Act Too Racy?
"Idol's" Lambert: I'm Gay. So What?
Adam Lambert Ready to Shake Up Pop World with CD
Out in the Spotlight
"American Idol" Season 8

Lambert told Rodriguez he didn't plan to be so provocative, saying, "Those kind of came from more of an impromptu place. No, those were not rehearsed. So I think ABC was taken a little by surprise. That wasn't my intention. I wasn't being sneaky. It got the most of me, I guess."

He also said he's "not a babysitter, I'm a performer" when asked if he wanted to apologize to parents of any kids who might have been watching. "I think it's up to the parents to discern what their child's watching on television," Lambert said at one point. Later he observed, "I think it's up to a parent to watch the television. It was almost 11:00 at night. If they're concerned with certain material maybe Tivo it and preview it before your small child is watching it."

He added he thinks the reaction to his performance stems from a double-standard against gay males, asserting that, "If it had been a female pop performer ... I don't think there'd be nearly as much of an outrage at all."

Lambert's mother, Leila, stopped by the show, saying the controversy left her "a little taken aback, but I just went with the flow, and it's all good."

Adam Lambert conceded to Rodriguez, "I suppose I can understand why (parents are) upset. And, honestly, it didn't cross my mind, children. It was almost 11:00. It was a nighttime show. I was there in the audience full of mostly adults. Sometimes, I forget, 'Oh, there's a camera on.' I come from the theater. And I'm programmed to kind of look at who's in the live audience, and that's kind of where I come from. So, I was looking out in the crowd and saw some of my favorite pop stars and thought, 'I want to let loose.' And it just kind of got the best of me. And I had a great time. Unfortunately, there were people upset, but I think there are also people who really enjoyed it. So, like 'Idol,' I guess I have a tendency to divide people -- apples and oranges -- you either like it or you don't."

He concluded the interview by promising parents his performance later in the show would be "appropriate. I promise."