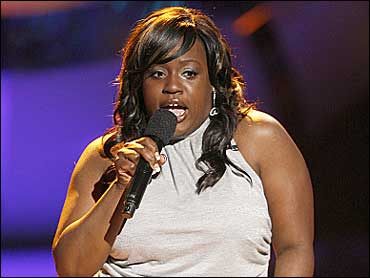 A kiss from Simon Cowell turned out to be a kiss goodbye.

A week after so impressing the cantankerous Cowell that he kissed her, LaKisha Jones was eliminated Wednesday on "American Idol." The Fox talent show is down to its final three contestants.

A nervous Jones seemed to have an ominous feeling Wednesday. Host Ryan Seacrest noticed she was talking to herself during one of the commercial breaks, and she admitted to overanalyzing things.

Performances of Barry Gibb songs the night before led to a particularly brutal week of Cowell criticism. "No kiss tonight, baby," Cowell had said to Jones.

He was even tougher on Blake Lewis, calling one of his takes "absolutely terrible." But asked to choose whether Lewis or Jones would be going home Wednesday, Cowell correctly predicted the results from the 45 million votes.

Jones, 27, grew up in Flint, Mich., and is the mother of a toddler. She began singing at age 5, has a passion for gospel but was formally trained in classical music. Tears streamed down her face as she said goodbye — but she stayed long enough to get a career kick-start from "American Idol."

Lewis, 25 and the only man left in the competition, overcame Cowell's attack. The fashion police may not forgive his choice of a t-shirt with a painted-on bowtie Wednesday. Lewis is from Bothell, Wash.

Doolittle, already a professional backup singer, was the first one given entrance into the group of three. Cowell had already predicted the night before that her performance had been enough to keep her in.

Gibb, the former Bee Gee, sang his own "To Love Somebody" on Wednesday's show, which was padded with marketing opportunities. There was even a lengthy tie-in to an action movie that isn't debuting until next month, complete with a visit from Jessica Alba.