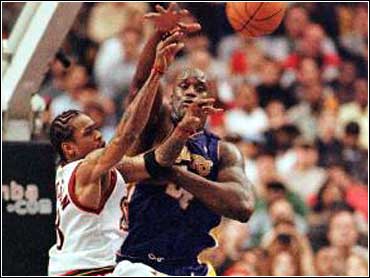 Bryant held Iverson scoreless in the second half and scored his team's final six points Sunday to lead the Los Angeles Lakers to their seventh straight win, 87-84 over the Philadelphia 76ers.

"What I tried to do was put myself in his shoes," Bryant said. "In the past when I've had games where I'm struggling, any moment I could go off. I'm sure he was thinking the same way, so I just played him."

And play him he did, blocking Iverson's shots from in front and behind and forcing him to drive the middle where Shaquille O'Neal was waiting.

Bryant and O'Neal each blocked shots by Iverson in the final 3.3 seconds, contributing to his 0-for-11 second half. The Lakers scored 11 of the game's final 14 points as an increasingly frustrated Iverson kept driving the lane, shooting against double- and triple-teams and looking for foul calls that never came.

"They played defense very well, and the referees never called a foul every time he went to the goal," Sixers coach Larry Brown said. "I thought (Iverson) was pretty upset the whole second half. I don't think you can blame him. His coach tells him to get to the free-throw line, try to drive it to the basket."

Bryant finished with 18 points, seven assists and five blocks, while O'Neal nearly had the second triple-double of his career with 22 points, 16 rebounds and nine assists.

Glen Rice contributed 18 points for the Lakers, who improved to 4-0 on their current six-game Eastern road trip with games upcoming against New Jersey and Cleveland.

"These next two teams we are supposd to beat, so yeah," O'Neal said when asked if a perfect road trip was likely.

O'Neal, whose lone career triple-double came in 1993, had a chance for his 10th assist when he fed a wide-open Brian Shaw with 51 seconds left. But Shaw badly missed an 18-footer.

"I got fouled on that play," Shaw claimed. "I'm not a great shooter, but I'm not that bad either. But at that point in the game they're not going to call that."

With the Sixers trailing by one and the clock ticking inside 10 seconds, Iverson drove the right side of the lane and had a runner cleanly blocked by Bryant while Toni Kukoc stood unguarded in the corner.

Bryant made two free throws with 1.7 seconds left for a three-point cushion, and Iverson's 3-point attempt at the buzzer was swatted away by O'Neal.

Theo Ratliff led Philadelphia with 20 points, Iverson had 16 and Eric Snow 10. Kukoc, playing his second game with the Sixers since being acquired in a trade with Chicago, had nine points, five rebounds and four turnovers.

O'Neal grabbed his 10th rebound with 4:47 remaining in the third quarter and turned it into a three-point play to give Los Angeles a 60-57 lead.

Kukoc then hit a runner, fed Tyrone Hill for a give-and-go layup and hit a pull-up jumper as part of a 7-0 run that put Philadelphia ahead 66-63, but he then missed a layup and airballed a 3-pointer as the Lakers closed the quarter with a 5-0 run to take a 68-66 lead into the fourth.

Ratliff scored Philadelphia's first six points of the fourth quarter and 10 of the Sixers' first 13, and a follow slam by Hill gave the Sixers an 81-76 lead with 4:10 left.

But the Lakers scored the next nine points including four from O'Neal on a put back and a dunk and four from Bryant on a pair of closely contested jumpers, to take an 85-81 lead into the final minute.

Snow hit a 3-pointer with 35 seconds left to make it a one-point game. After A.C. Green misfired on a jumper with 11 seconds left, Iverson had his drive rejected by Bryant.

"It's always tough playing against somebody quick and tall, because they can kind of back up off you and get a hand in your face even if they back up off you," Iverson said. "He did a great job, but I always feel like the only person who can stop me is myself."