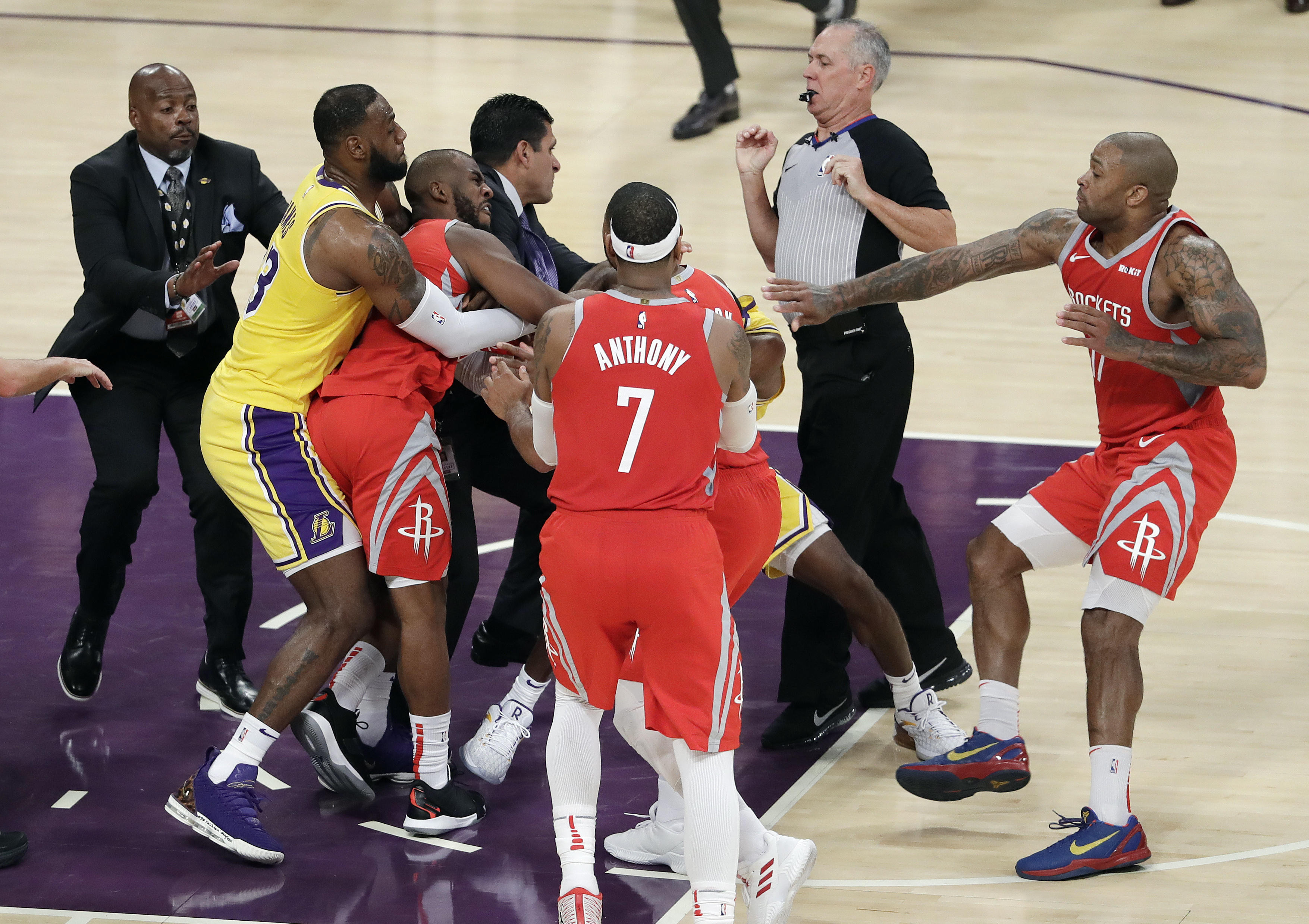 LOS ANGELES -- Lakers teammates Brandon Ingram and Rajon Rondo and Chris Paul of the Rockets were suspended without pay Sunday for an on-court fight, with Paul taking the heaviest financial hit. Ingram was suspended four games, Rondo will sit out three games and Paul two games.

The NBA handed down the punishments a day after the incident in the fourth quarter at Staples Center.

The penalty was costliest to Paul, who has the highest salary of the trio and was fined a total of $491,782. Paul is president of the NBA Players' Association. He began serving his suspension Sunday night and wasn't at the arena when the Rockets lost to the Clippers 115-112. Rondo will be docked a total of $186,207, while Ingram's total is $158,816.

"It's just not equitable," he said. "If you wanted to suspend him one (game) I get it, just to make a statement. Then you're talking monetarily, he's paying three times more than the other guys are paying for missing games? That doesn't seem to be right."

Ingram and Rondo will start their suspensions Monday night when the Lakers host the San Antonio Spurs.

The league said Ingram was suspended for aggressively escalating the altercation and throwing a punch in the direction of Paul, confronting referee Jason Phillips in a hostile manner, and instigating the overall incident by shoving Rockets guard James Harden.

"It is what it is," Harden said. "I don't know how to decide how many games."

Eric Gordon, who started in place of Paul against the Clippers, defended his teammate, saying, "If somebody is attacking you, you got to somewhat protect yourself."

"What is he supposed to do? Just stand there and get spit on and then take a punch in the face and say, 'Well, that's OK,'" said D'Antoni, who called Rondo's spitting "pretty disgusting."

"In the heat of the moment when somebody does that, that's tough, that's really tough," D'Antoni said.

CBSSports.com's Kyle Boone reports there was some debate about whether Rondo actually spit on Paul. ESPN aired a video that appeared to capture Rondo spitting.

The Rockets led 109-108 with 4:13 remaining when Ingram fouled Harden and then shoved him and confronted Phillips after getting a technical foul.

"We don't want this to happen again," said NBA executive vice president Kiki VanDeWeghe, who handed down the penalties. "(We are) sending a clear message that this is not acceptable behavior and you cannot do this. So in this particular instance, the multiple-game suspensions are pretty severe both to their teams and financially to the players."

The suspension to Ingram is the longest for an on-court incident since April 2012, when Metta World Peace of the Lakers received seven games. World Peace elbowed Harden, who was then playing for Oklahoma City, in a game also at Staples Center to earn that penalty, the irony being Harden is the one who Ingram fouled to start Saturday's fracas.

There have been longer suspensions in recent years, but none for an on-court altercation than what Ingram got.

"We have so few of these and we're very lucky in that regard," VanDeWeghe said. "This game is played with a lot of passion and it's an aggressive game and obviously there is contact in the game. Our players play with a lot of respect for each other and for everybody else."

With Paul and Rondo, that hasn't always the case.

They have a history of raising the ire of the other, going back to at least 2009 during a Boston-New Orleans game. Rondo was with the Celtics and Paul with the Hornets when players from both sides had to get between the two point guards as tempers seemed to flare after a game where they got tangled up in the second quarter.

VanDeWeghe clearly indicated that Rondo did not acknowledge spitting on Paul.

"Rajon has his own view of what happened," VanDeWeghe said. "I think that we had a clear view that, however you want to interpret it, that there was a spitting in Chris Paul's direction. I think I'm going to leave it at that."