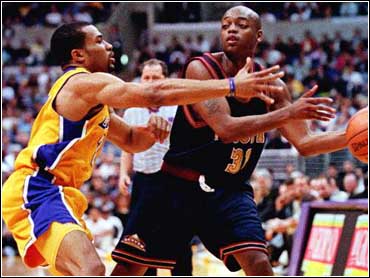 The Lakers' Kobe Bryant got tired of his pal, Denver assistant coach John Lucas, riding him.

"It's just kind of nice to shut him up," Bryant smiled and said Monday night after he and Shaquille O'Neal helped Los Angeles rally from a 17-point, third-quarter deficit for a 106-98 victory over the Nuggets.

"Every time we play them, he's talking trash to me," Bryant said of Lucas, a longtime friend. "He was saying before the game, We're going to get you tonight."

Bryant had 29 points, 11 assists and nine rebounds, and hit three 3-pointers to help the Lakers catch up in the first five minutes of the fourth quarter.

Asked if he knew he was within one rebound of a triple-double, Bryant grinned and said, "Darn. If I'd known that, I would have bulled Rick (Fox) out of that last rebound."

O'Neal also came close to a triple-double, with 35 points, 13 rebounds and eight assists. Eleven of his points came in the fourth quarter, along with 10 by Bryant, as the Lakers outscored the Nuggets 35-19.

"We dug ourselves in as deep of a hole as we could and we got out of it," Lakers coach Phil Jackson said. "We played an emotional game to do it."

Nuggets guard Nick Van Exel, who scored 18 points against his former team, said, "Kobe caught fire out there and then it got contagious,"

Antonio McDyess, who led Denver with 24 points, agreed, saying: "Kobe started hitting big shots for them. The crowd got them into the game and they got the momentum going."

The Nuggets also blew a 17-point lead heading into the fourth quarter against Minnesota on Saturday before losing in overtime. A night before that, they led Golden State 101-95 with 2:56 remaining but lost 103-101.

"I guess you can call us `three-quarter Nuggets,' because in the fourth quarter, we lt the game go every time," McDyess said after Denver lost its ninth straight road game and fell to 3-16 away from home.

After trailing since the second quarter, Los Angeles tied it at 87 on Fox's 3-pointer with 6:51 remaining.

A layup by O'Neal gave the Lakers a 97-96 lead with 3:20 left in the game and they stayed in front the rest of the way. Another 3-pointer by Fox with 1:02 remaining gave Los Angeles an eight-point pad and completed the scoring.

Thanks to a 20-6 run to start the second quarter the Nuggets opened a 62-50 lead by halftime.