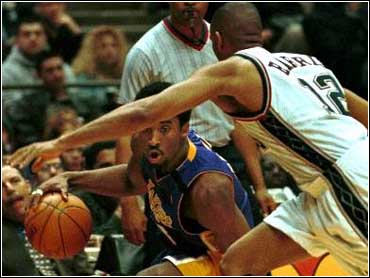 Compared to his past performances at the Meadowlands, Shaquille O'Neal only graded this one a "C."

Pretty tough self-critique for a guy who scored 35 points and grabbed 13 rebounds with four assists and three blocks. Then again, he once scored 50 at the Meadowlands, he also had his only career triple-double there, and another time he collapsed a basket support with a vicious dunk.

"I should have had 50," O'Neal said after leading the Los Angeles Lakers to a 97-89 victory over the New Jersey Nets to extend the Lakers' winning streak to eight games. "I missed a couple of shots and a couple of free throws."

O'Neal broke the 30-point mark for the 22nd time this season as the Nets declined to double-team him and let Jim McIlvaine and Even Eschmeyer guard him by themselves.

"Who else are they going to put on me, (Gheorghe) Muresan? I'll do the same to all of them. Doesn't matter who they put on me, even if they put Willis Reed on me," O'Neal said.

There was nothing particularly flashy or fancy about this win, just a perfect combination of tough defense from everyone and offensive contributions from the Lakers' three best players.

Los Angeles opened a comfortable lead midway through the second quarter and led by at least seven the rest of the way, holding off any thought of a Nets comeback by limiting New Jersey to one field goal over a seven-minute stretch of the fourth quarter.

The Lakers won for the fifth time on a six-game Eastern road trip that concludes Wednesday night at ClevelandLos Angeles is 18-2 against teams from the East, including 9-1 on the road.

"One more left, and we want to close it out," Bryant said. "It seems like the Eastern Conference is less of a power conference than it was in the past. The power players are more in the West, and we beat up on a lot of the East Coast teams by going inside."

Stephon Marbury scored 33 and Kendall Gill 18 to lead the Nets, who had their two-game winning streak snapped.

After a tight first quarter, the Lakers put some distance between themselves and the Nets with a 16-4 run early in the second quarter for a 34-21 lead. O'Neal scored the Lakers' first eight points of the third quarter, and two 3-pointers by Rice got the lead up to 14.

Marbury scored 11 of the Nets' final 13 points of the third quarter to help the Nets pull within nine entering the fourth, but New Jersey never made a run over the final 12 minutes.

"We never quit," Keith Van Horn said. "I think the guys went out there and played hard. They just had the X-factor, Shaquille. He was great tonight."

New Jersey pulled within eight on a dunk by Keith Van Horn with 1:50 remaining, but Bryant dunked his own miss and Brian Shaw scored on a fast break to end all doubt.