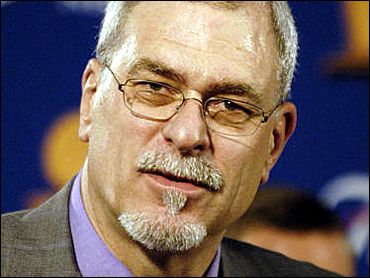 The coach is leaving, one superstar has opted out of his contract, and the other wants a trade.

The breakup of the Los Angeles Lakers began in most dramatic fashion.

Phil Jackson, one of the most successful coaches in NBA history, won't return in that capacity with the Lakers next season, the team said Friday.

As that was being announced, a team source told the AP on condition of anonymity that Shaquille O'Neal, a staunch supporter of Jackson, had requested a trade.

And as expected, Kobe Bryant became an unrestricted free agent, opting out of his contract.

All this just three days after the heavily favored Lakers lost to the Detroit Pistons in the NBA Finals, ruining their attempt at a fourth championship in five years.

"Oh, we've had such a great run here. It's been a great time," Jackson told KNBC-TV outside the Greek Theatre on Friday night. "You know, things have to end. This is the right time for me."

Jackson said his relationship with Bryant, shaky over the years, was not a factor in what happened.

"The Lakers will go on and so will Phil Jackson," he said.

Jackson agreed with Lakers owner Jerry Buss to end his tenure as coach. Buss offered Jackson another position with the organization, which Jackson will decide whether to accept soon, the team said in a statement.

Jackson's departure was expected even before he met with Buss following the coach's participation in season-ending interviews with several players earlier in the day.

Jackson's five-year, $30 million contract expires at the end of the month. He was discussing a contract extension, but the Lakers broke off talks in February until after the season.

Jackson joined the Lakers in June 1999, and coached them to their first championship in 12 years in his first season. Two more titles followed, giving him nine to tie him with former Boston coach Red Auerbach for the most in NBA history.

The Lakers were eliminated in the second round of the playoffs by eventual champion San Antonio last year and reached the NBA Finals this year before losing to the Pistons in five games.

The 58-year-old Jackson coached the Michael Jordan-led Chicago Bulls to championships in 1992-94 and 1996-98. Jackson then took a year off before becoming coach of the Lakers. His teams in Chicago and Los Angeles had a 9-0 record in the NBA Finals before this year.

O'Neal said in a telephone interview with the Los Angeles Times and Los Angeles Daily News that he had lost faith in the franchise and general manager Mitch Kupchak.

"Right now, upstairs in the Laker offices, they've lost the team concept. They're trying to pit people against each other. ... So, obviously, we don't have the same thought process anymore. That's fine."

Kupchak said Thursday he would consider trading O'Neal if that's what the 32-year-old center wanted. O'Neal has two years remaining on his contract but can opt out next season.

Karl Malone has already opted out of his contract, although he hopes to play for the Lakers if healthy. Gary Payton and Derek Fisher could follow Bryant and Malone and opt out of their deals, although it's believed Payton will exercise his $5.4 million option now that Jackson is gone.

Kupchak made clear the team's priorities Thursday when he said the Lakers would do anything they need to keep the 25-year-old Bryant.

Kupchak said the team will offer Bryant the maximum allowed - seven years and more than $140 million. That's a lot more money and one year longer than any other team can offer.

O'Neal, Bryant and Fisher all joined the Lakers in 1996. Bryant had his differences with Jackson, especially over the triangle offense employed by the coach.