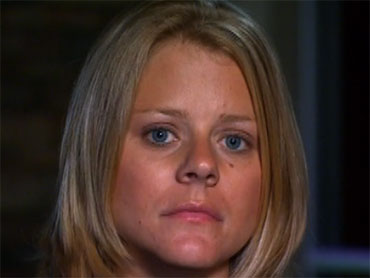 Tiffany Hartley, the wife of missing American David Hartley, said on "The Early Show" Thursday she doesn't believe her husband is alive.

"Unfortunately I don't think he is alive at this time, since we're almost a week since he's been gone. I do believe that possibly they do have him and they're hiding him. And if they would just give us back his body, then we can move on."

Tiffany said she and her husband's family are just trying to survive as they wait, hoping for news that his body has been found.

"We're just trying to get through this and you know, being in the media and stuff, it's not easy," she said. "It's not easy to kind of be in the spotlight right now, especially when we're trying to grieve for David and get him home and trying to plan all the services here and in Colorado. We're just in survival mode."

Mexican officials have intensified their search the American, who was shot, according to his wife, while they were jet-skiing on the lake that straddles the U.S.-Mexico border.

CBS News correspondent Don Teague reported on Wednesday, six days after her husband David was allegedly shot and killed by suspected Mexican pirates on Falcon Lake, Tiffany returned to the water, this time, to place a wreath near the site of the shooting to say goodbye to her lost husband and to pray with his family.

Tiffany Hartley said Wednesday, "We know he's out there somewhere and we just wanted to go ahead and leave the flowers where I had lost him."

The tearful goodbye came even as a task force of Mexican police and soldiers searched their side of the lake by boat and helicopter -- a welcome sign after what the Hartley family considers only half-hearted search efforts by Mexican authorities so far.

The American sheriff investigating the shooting suspects his counterparts across the border are afraid of the heavily armed drug cartels that control the Mexican side of the lake.

Wednesday's search, which failed to find Hartley's body or sign of his jet ski, may have been prompted by increasing political pressure on the Mexican government.

Pam Hartley, mother of the missing jet skier, says it's still not enough.

She said, "President Obama, Hilary, they're parents. They know…please negotiate this. All we want is David home."

Tiffany says only when her husband is found and returned will she and his family finally begin to heal.

Tiffany said, "It's very emotional because I know he's out there and we just all want him back."

On "The Early Show" Thursday Tiffany Hartley responded to ongoing questions about her story.

Mexican investigators have questioned Tiffany's story this week, saying they wonder whether the attack took place at all. In a statement, Marco Antonio Guerrero Carrizales, district attorney for the Miguel Aleman Province, wrote, "We are not sure. We are not certain that the incident happened the way they are telling us."

The district attorney questions why his body has not been recovered, particularly because they were told he was wearing a life vest and why there is no sign of his jet ski. In fact, the district attorney contends, no evidence exists that a crime was committed.

Tiffany admitted on "The Early Show" that there is no evidence of a crime because she doesn't know the state of her husband's jet ski -- because it hasn't been found -- and her jet ski doesn't have any bullet holes.

However, she added a witness has come forward that says she was being chased.

"Early Show" co-anchor Maggie Rodriguez said American police are getting involved, but on the Mexican side, they're saying they wouldn't stand a chance.

"They would be outgunned," Rodriguez said, adding, "Is that discouraging to you? Do you feel they might not be as likely to search because they're afraid?"

Tiffany said, "It is discouraging, yes. They need more manpower and they are asking for more people to come and help them. Currently, right now, we think they have like 40 people or so, we're don't really know for sure how many, but they are probably outnumbered, so we do need -- they do need to get more people to help them."

When asked if she's satisfied with the search response, Pam Hartley replied "no."