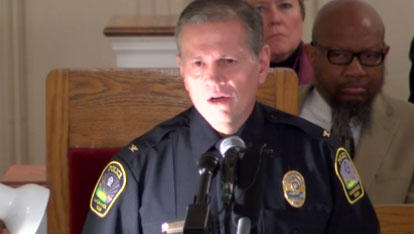 Dekmar publicly apologized for the lack of protection given to Austin Calloway when he was shot to death in 1940, reports CBS Columbus, Georgia affiliate WRBL-TV.

Dekmar says the path to the apology began when an investigator told him two elderly African-American women pointed to a historical picture saying, “They killed our people a few years ago.”

He says that in September, 1940, a group of armed, masked men took Austin Callaway from a jail and drove him away.

The next morning, a passerby found Callaway bleeding to death from gunshot wounds. He died hours later.

“What was done was wrong,” Dekmar told a diverse crowd in a Methodist church.

He apologized for the police department’s lack of response concerning the 18 year old’s murder.

“I, on behalf of the Lagrange Police Department and the city of Lagrange, want to acknowledge the police department’s failure to take crucial action in its obligation to protect Austin Callaway on September 8, 1940,” he said.

“An acknowledgment and apology is necessary to aid in healing wounds of past brutalities and injustice,” he continued.

Callaway’s family was there for the apology, including his second cousin, Glenn Dowell.

“Here comes Lagrange, Georgia, which has previously been kind of an oligarchy, ruled by an oligarchy in the community, changing. It has changed for the best,” Dowell said.

Dekmar said the apology works toward bringing a deeper trust between the community and public safety officers.

“This is just one more step that is a significant step, but it’s not the concluding step,” Dekmar remarked to WRBL.

The local NAACP announced that its members accept Dekmar’s apology.

Dekamr’s mayor and some other city officials also spoke.