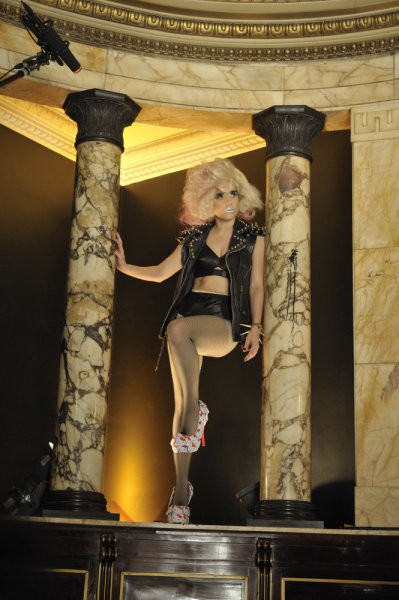 NEW YORK (CBS) Lady Gaga is used to wearing outrageous and other-worldly outfits whether she's performing on stage or walking the red carpet, but when she's asked to pose in a 50-pound crystal dress for a Hello Kitty-inspired photo shoot she finds out there are bigger divas out there than she - the photographers themselves!

On the upcoming July 13th episode of Bravo's "Double Exposure", an original docu-series that follows well-respected, celebrity photographers Markus Klinko and Indrani along with stylist GK Reid, Lady Gaga almost passes out when the heat literally turns up as Klinko and Indrani bicker over the shot.

Looking fabulous is one thing, but putting up with frustrated photographers is another, so Lady Gaga walks off the set - shiny crystals and all.

Despite the tension, Klinko is really "gaga" over the singer, saying "There couldn't be anybody I would consider more important and more the ultimate symbol of pop culture than Lady Gaga."

Maybe he should have said that to her face before she walked off the photo shoot.

Just when you think the drama is over the flustered duo takes on fiery and feisty supermodel Naomi Campbell later in the episode.

"Naomi has quite the reputation for having a very short fuse and I don't want to get on her bad side...I'm nervous about giving direction to Naomi," Indrani added.

The celeb photog duo, whose tension stems from an eight-year relationship that went sour, has shot some of the best in the business including album covers for David Bowie and Beyonce to prize-winning photographs of celebrities such as Kate Winslet and Will Smith.

Watch a sneak peak of Lady Gaga's Hello Kitty-inspired photo shoot on Bravos' "Double Exposure" Episode 105: "No One Can Work Like This," which airs on July 13 at 11 p.m. ET/PT.