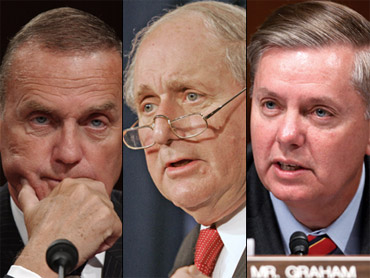 Each man's attorney entered an innocent plea today on his client's behalf. Only one of the men is free on bail. The others remain behind bars.

Prosecutors say the men were awaiting orders from bin Laden's terror group to carry out an attack in the United States.

The six men were indicted Monday on charges of supporting terrorism by training at an al Qaeda camp in Afghanistan where Osama bin Laden declared that there "is going to be a fight against Americans," authorities said.

A federal grand jury handed up indictments charging six Americans of Yemeni descent from the Buffalo suburb of Lackawanna with providing material support to a foreign terrorist organization.

The men, who were arrested just days after the anniversary of the Sept. 11 attacks, could get up to 15 years in prison if convicted under a 1996 law that prohibits giving money, weapons or other tangible support to foreign groups deemed by the government to be terrorist organizations.

Sahim Alwan, 29, was granted bond of $600,000 at a hearing two weeks ago. Arrangements for his release were still being worked out.

While acknowledging there was no evidence of an imminent threat posed by the men, prosecutors maintain the men had been awaiting orders from bin Laden's group to carry out an attack in the United States.

In spring 2001, the men traveled to Pakistan, ostensibly to pursue up to two months of religious studies. But prosecutors say Alwan and al-Bakri told authorities the men instead attended a military camp near Kandahar, Afghanistan, where they were trained in the use of weapons and explosives.

According to prosecutors, the men went to the Al Farooq training camp a few months before the Sept. 11 terror attacks. There, "bin Laden told them in unequivocal terms that there `is going to be a fight against Americans,"' prosecutors say.